Every election there are groups out there that produce pins featuring the entire field of candidates for any particular political party. The Democrats of 2016 were no exception. Conventions and special events that all candidates were invited to often saw a button, poster or sticker produced for it. Here are some that I was able to get this last year. 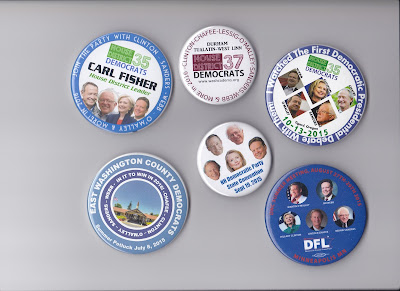 Most of these pins are from Oregon and groups associated with the Washington County Democrats. The first 3" pin to note is from the HD 35 Democrats. They held a Potluck in The Park in the summer of 2015 and members who RSVP'd got a custom pin with their name and title that included all the current Democratic candidates for President. The one in the larger picture only features 4 candidates (O'Malley, Sanders, Clinton, Webb). This pin was made prior to former Rhode Island Governor & Senator Lincoln Chafee announced his intention to run.

Here is one made later that does feature Chafee. 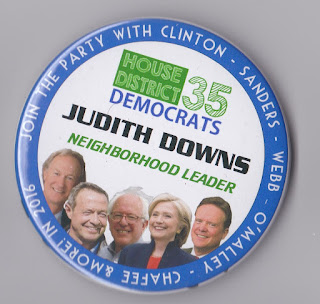 The pins featured titles depending on your role with the party. The various titles were: House District Leader, Neighborhood Leader, and Precinct Committee Person.

Another great pin, also a 3" came from the DNC Summer Meeting in 2015. The event was held in Minneapolis, MN. All the candidates showed up except former US Senator Jim Webb to lobby DNC members about their campaigns.

The Minnesota Democratic Farm Labor Party issued this pin in honor of the event. 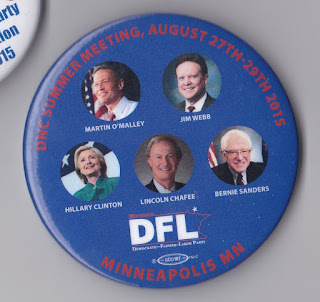 It features a union bug, DFL logo and color photos of all the candidates. We wrote about this button shortly after the event. You can read that post here. 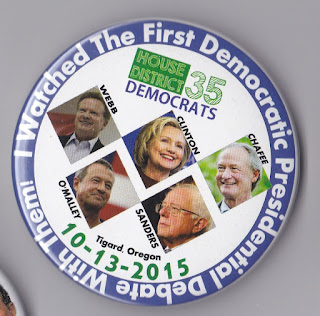 This 3" pin was made for the HD 35 Democrats Debate Watch Party. It was the first debate to feature most of the field of candidates. Once candidate Larry Lessig declared he faced what appeared to be resistance by the debate organizers to allow him to participate in the remaining debates.

The other pins in the photo above are a 3" East Washington County Democrats pin from their potluck in King City featuring the names of all the Democratic candidates. A 2.25" inch pin sold at the New Hampshire Democratic State Convention featuring the faces of all the candidates. The last pin might be the most interesting of the lot. It is a 2.25" inch pin from a meeting of the HD 37 Democrats in Durham to get people organized for the upcoming election. It may well be the only Oregon pin that has Larry Lessig on it. In a future post we will write about the campaign items produced by Larry Lessig in 2016.

If you have a group pin for any party, please feel free to share it here.