2020 Political Buttons Part 3: The Campaign Is Over For Them

We are fast approaching Labor Day in the United States. A traditional time for many candidates to be starting their campaigns and known as the time when the pubic during general elections, traditionally starts to pay closer attention to the race. The next Democratic presidential debates are not until September and the last debate was at the end of July. Between these two events, we have already seen several candidates drop out of the race in just the last week.  Seth Moulton, Jay Inslee, and John Hickenlooper have all dropped out in August. They joined Mike Gravel and Eric Swalwell after they bailed on the race in July. While these campaigns may not have made it to Iowa or New Hampshire, many of them did participate in the first two debates, had supporters and even generated a button or two. Let's take a look at the items produced by some of these campaigns.

The first presidential candidate to come from the Pacific Northwest in more than forty years sought to raise the profile of the climate change debate in the United States. Governor Inslee started his quest for the Democratic nomination in March of 2019 and ended it on August 21, 2019. He was able to qualify for the first two debates, but only met 1 of 2 qualifiers for the September and October debates. He was able to gather over 130,000 individual donors but not able to secure 2% or more in 4 qualifying polls. After coming to the conclusion that he could not raise his profile enough to raise his poll numbers he opted to drop out and run for a third term as governor of Washington. Here are some of the items, especially buttons, produced to promote his presidential campaign. There are a fair number of vendor items out there and right now you can also find pretty good deals on items issued by the campaign or supporters. 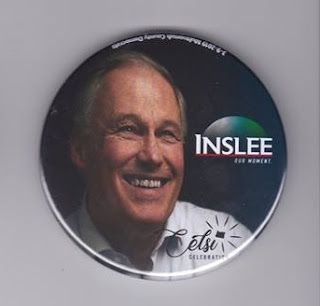 This first pin comes from a set of fifteen 3" inch pins created for an auction basket for the Multnomah County Democrats Dick Celsi Dinner & Auction. At the time, March 2019, there were only 14 candidates announced. The set included the 14 announced candidates and a pin for Jeff Merkley, who had just announced he was not running for President. The pins were included with a couple bottles of wine and auctioned off during a silent auction. Somehow, the one set auctioned off made all the way to the Political Junkie Ken Rudin!

Read more »
Posted by Carl Fisher at 4:30 PM No comments: