An APIC member posted these on facebook recently. Pre-1940 Charles McNary campaign items. His items are super rare and very few are known to exist. If there are more out there, they are most likely tucked away in attics, boxes in the back of antique shops, and storage unites. At least now, Oregon collectors can know at least two items they can look for. 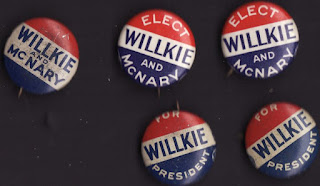 You are probably more familiar with McNary from these kind of buttons that were produced in the millions in 1940 for the Republican ticket. McNary and Willkie would do a little better than the 1936 ticket of Landon & Knox, and chip away at FDR's support. The ticket picked up 74 more electoral votes, but still not nearly enough to get to the White House.
McNary was an Oregon Supreme Court Justice before becoming a United States Senator. He first served from 1917-1918 and then from 1919 to his death in 1944. By the 1930s, he was the Minority Leader in the United States Senate for the Republican party. At the time of this death he was the longest serving United States Senator in Oregon History. This record now is held by Republican Mark Hatfield. An interesting fact, both Willkie and McNary died in 1944. If they had won the election, both would have died before the end of their first term.

Here are the early McNary items.


These are both just small business card sized handouts. For the elusiveness of McNary items it doesn't get much better than these. It is a lesson to all of us, that you just have to keep on looking.
Posted by Carl Fisher at 8:58 AM No comments: