The hours on the Obama Administration are waning. He has a little over a week left in his presidency. The Trump Administration will begin shortly after Donald Trump takes the oath of office as is customary in our democracy. I thought it timely to start to look back at items from Barack Obama's campaigns in Oregon. You might have other favorite items and if you do, please share them! We will also share non Oregon items in another post.

I figured it would be good to start in 2008. From my collection, these are some of my favorites. 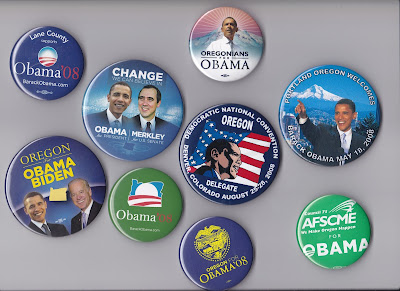 Let's start with the easy ones. 4 of these pins are from Tigereye Design. In 2008, they were the official vendor of the Obama for America campaign. They made hundreds of designs on thousands of pins nationwide. More of their generic versions will be found for years to come. While they might not be of much monetary value, they will most likely hold a lot of sentimental and emotional value to activists from this era. They will provoke stories as good as any Nixon Now or Willkie-McNary pin.

The 3" Obama-Merkley pin was very popular in activist circles in the Portland area. Jeff Merkley would narrowly win election to the US Senate, defeating incumbent Gordon Smith with help from what many called the Obama Wave. Merkley would win re-election in 2014 and in 2016 play a pretty important role in helping elevate the national political candidate Bernie Sanders by being the only US Senator to endorse Sanders.

Every Democratic candidate for US Senate had an Obama-(insert name here) coattail pin, along with all the candidates running for governor in 2008 across the country. The Obama-Biden 3" Oregon pin was issued by Tigereye after Biden was named the VP candidate. The 2.25" pin with the state seal was also sold on their website to the general public. 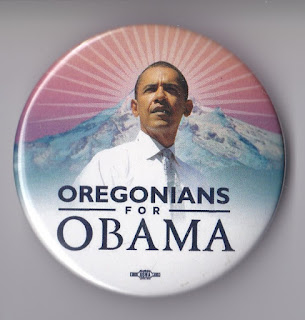 The 2.25" Oregonians for Obama pin with a great graphic of Mt. Hood in the background was made by Tigereye Design, but we are unaware if it was ever sold to the general public on their website. It has all the typical things associated with TD (yellow sticker on reverse, USWA union bug, and TD info on curl). Some collectors suspect that it was ordered by either the state party, a county party or perhaps even the Obama Oregon committee for their use exclusively. In 8 years, this is the only example I have found. 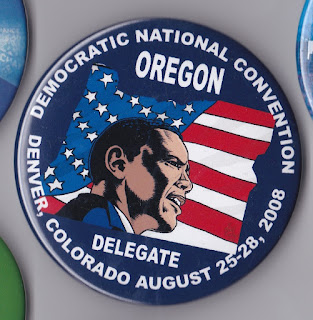 These 3" inch pins made by Yellow Tractor pins stole the show at the the 2008 Convention. Every Oregon Delegate got 2 in their materials. Yellow Tractor pins was an Oregon button mint that made the official Oregon delegation pins for the Democratic Party of Oregon from 2000-2008. A version was made for Delegates, Alternates, Pages, and Honored Guests (not sure on this last one). My delegate pin came from Delegate Mac Prichard of Portland and my Alternate pin (not pictured) came from Bob Stoll. It was great to hear about their experiences about attending the convention. I had no idea when I got these pins that I would attend the Democratic National Convention in 2016 as a delegate and hear President Obama give his last convention speech as President.

The Green Oregon Obama logo pin was one I picked up online recently. Even 8 years later you can still find Obama pins online and other places you have not seen yet. There were lots of small groups all over the country making Obama pins and stickers for reaching out to their communities.

The Green AFSCME pin was issued by the Oregon local of the national union. Oregon 75 was one of two State AFSCME unions known to break with the national union that had endorsed Hillary Clinton in the 2008 primary. A really nice pin to have. There is also a matching rally sign given out at his large Waterfront Park Rally prior to the May 2008 primary. 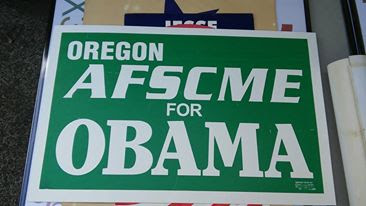 The Lane Co. Obama button is a Dr. Don button. Dr. Don makes buttons for every candidate and local groups often buy his pins because they feature a union bug and can get several hundred for events and swag sales for their groups. Most likely the Lane Co. Democrats or Lane Co. Obama group bought these to sell at fairs and party events. The final pin is a 3" Portland Welcomes Obama pin to his big waterfront rally in 2008. This was made by Yellow Tractor pins. The rally attracted over 70,000 people in the lead up to the presidential primary that year. It made national headlines.

Then Senator Obama would win the Oregon Primary in 2008 and send 31 lucky delegates to the historic speech at INVESCO Field in Denver. They were just a tiny fraction of the 84,000 attendees of the speech.

By the way, did you know that the American Political Item Collectors has their own Obama Fan Club? It is a specialty chapter for anyone that admires and/or collects Barack Obama stuff.  Click here to learn more about the OPIC.

Have an Oregon Obama item from 2008 you want showcased? Leave us a comment and someone will get a hold of you!