In our last update on 2020 campaign items, we covered a series of candidates that had dropped out of the race over the summer of 2019. It seems that as soon as we hit publish on a post there is something worthy of an update. A few days after our last post, New York Senator Kirsten Gillibrand announced she was dropping out of the race for the Democratic nomination. She decided to because of the campaign was unable to qualify for the next round of Democratic Debates. She was unable to secure higher polling numbers and the required unique donors.

This was just as her campaign, only a couple weeks before this had begun to offer buttons in her campaign store. It would be interesting to know if she would have reached the 130,000 donor threshold had she offered buttons on her website a few months ago, instead of a few weeks ago. Here is the button that was offered on her website. 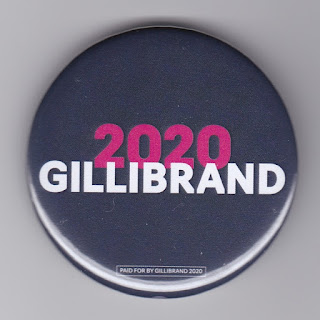 Read more »
Posted by Carl Fisher at 8:19 PM No comments: