Shortly after Thanksgiving in 2016 Oregon lost one of its most humble public servants. Hardy Myers passed away at the age of 77. Born in Electric Mills, Mississippi. Like many, he found his way to Oregon when his family moved here for the logging. His father worked in the Bend area before settling the family in Prineville. That's where he met his future wife Mary Ann. He would go back to the East for college and then return again for to Oregon for law school.

Hardy Myers enjoyed public service. It seemed to be in his blood. As a volunteer in his local Parrish he got the attention of others in the community. He soon found himself volunteering to serve on public boards and commissions in Portland. That would then get friends to urge him to run for the Oregon Legislature. You can read about many of his accomplishments in elected office here.

Here are two pins from his early campaigns in the Oregon Legislature. 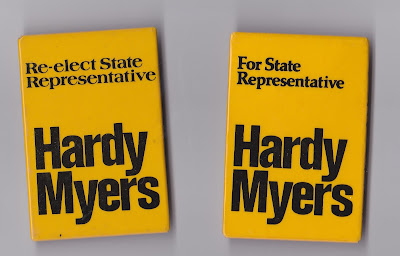 The pin on the right is from his first campaign in 1974 and has committee information on the curl. The pin on the left is from one of his re-election campaigns, maybe 1976? But could also have been used in 78, 80 or 82. He declined to run for re-election in 1984 and went back to private practice. During his time in the legislature he was rated 'Most Outstanding Legislator' several times by the local press. He was even elected by his peers as Speaker of the House for the 1981 session.

After leaving elected office for some time, he would again serve the Portland community in many different capacities. He was elected to the Metropolitan Service District (the precursor to METRO). He was eventually named chair of the Metro Charter Committee that took METRO to the ballot in 1992. Without citizen leaders like Hardy Myers METRO would not exist today. During this time he also sat on several boards and commissions related to the justice system and PERS.

In 1996 Attorney General Ted Kulongoski ran for the Oregon Supreme Court and Hardy Myers jumped at the chance to run. He defeated then Democrat Kevin Mannix for the nomination and then defeated Republican Victor Hoffer in the November general election. Still, Hardy Myers thought to befriend Hoffer and appointed him to an Elder Abuse Task force.

He would seek re-election in 2000 facing now Republican Kevin Mannix in the general election. This time by a much closer margin than his 1996 victory. These pins are 3" each and should have a sticker that reads 'WMS Student Fundraiser' on the reverse. The one on the left is from his 1996 campaign and the one on the right has an added 'RE-ELECT' sticker on it for the 2000 campaign. I picked up the 1996 personally from Hardy Myers. He said he and his wife were cleaning and found in a dresser and kept it for me.

2004 would be his last election. He faced Republican Attorney Paul Connolly. 2004 was a presidential election year in Oregon and while at times down ballot races like Attorney General were being sometimes ignored by the public, Myers made the most of increased political awareness of the public in response to the Kerry-Bush presidential race and was seen at many events simply explaining to voters that may never have known they had an Attorney General what he did on their behalf.

One of the things that drew great praise from young and liberal voters of the day was taking on US Attorney John Ashcroft in defending Oregon's Death with Dignity Act. The case eventually made its way to the Supreme Court and the high court ruled in favor of Myers and the State of Oregon in Gonzales v. Oregon that was won in 2006. 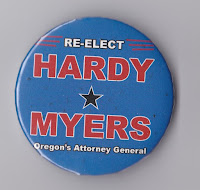 They are 2.25" and most likely have some foxing. There are numerous paper items, yard signs, even banners. He won re-election to his last term in 2004, deciding not to run in 2008.

Myers passed away from complications with pneumonia. He had been suffering from lung cancer for the last two years. He leaves behind a legacy of public service and befriending political allies and foes alike. More importantly he was my friend and I will miss his humor and wisdom (that often came in the same comment).