The state of Oregon lost one of its most interesting political figures of the last fifty years when Tonie Nathan passed away today. She was a founding member of the national Libertarian Party and the first woman in United States history to receive an electoral vote in the 1972 presidential election. She was also the first Jewish American to receive an electoral vote. Beating both Geraldine Ferraro and Joe Lieberman to those historic firsts.

While her electoral exploits from 1972 are mostly remembered for good trivia for Oregon political junkies today; her victory of a single electoral vote in 1972 are due to the thanks of elector Roger MacBride.

Read more »
Posted by Carl Fisher at 7:34 PM No comments:

Picked this item up at the Portland Expo Antique & Collectable show earlier this month.

Don't know a whole lot about these 'Republican Clubs', it appears though from looking around the archives of  Oregon newspapers that they were around as late as the 1950s. You can find several articles mentioning the election of new officers and adoption of various policies for the Oregon GOP platform. Here's an article from the Bend Bulletin reporting on the highlights of the convention that this particular pin is from.

Read more »
Posted by Carl Fisher at 9:30 PM No comments: 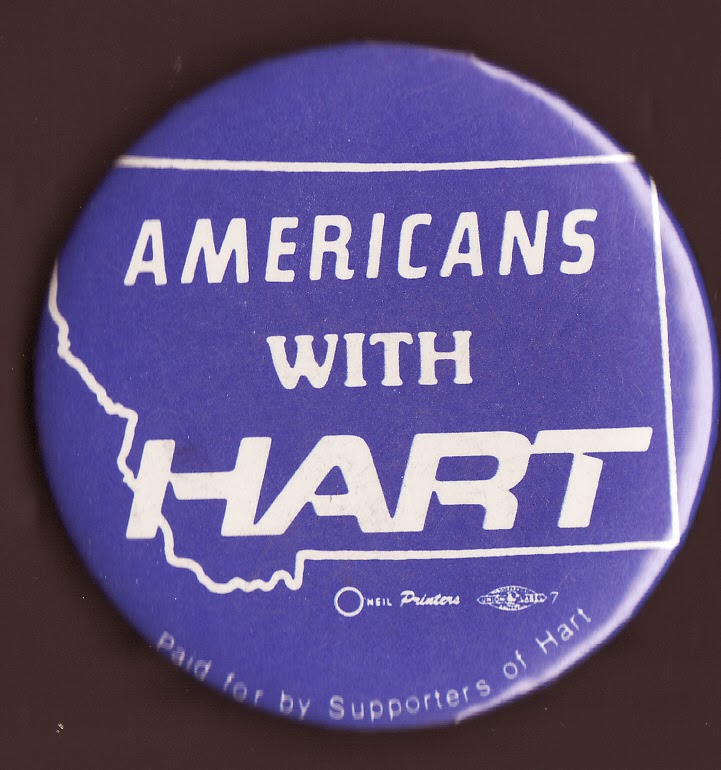 Was able to add this Montana Gary Hart pin from his 1984 campaign to my collection this weekend. I thought I found a really great Democratic primary campaign item. Having done a good deal of reading and research on the 1984 election in general, I had a fair understanding of the dynamics of the race between Mondale, Hart and Jackson. What I didn't anticipate was seeing on the results map was the uncommitted slot winning the 1984 Montana Democratic Primary.

I knew then, I had to do a little more digging to find out how this came to be. Gary Hart seems to be a candidate that should have won the primary, being a Senator from neighboring Colorado.

Earlier in year, back in March of 1984 Montana Democrats had met for a Caucus. Hart would beat Mondale in the caucus and gain 11 of the 19 delegates up for grabs. Mondale would take 8 and the remaining 6 were unpledged super delegates that could vote for whomever they wanted.

Read more »
Posted by Carl Fisher at 6:42 PM No comments: