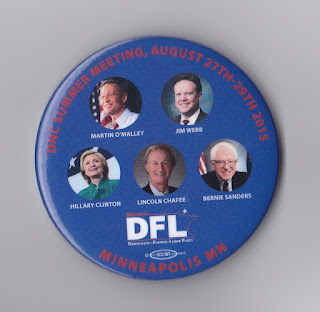 This button is from the 2015 August DNC meeting that featured 4 out of the 5 major Democratic candidates for the Democratic party's presidential nomination. It is three inches. One of the many party themed buttons showing multiple candidates we will see from the political party events in 2015-2016.

Former Senator Jim Webb declined the invite because he was helping his daughter move into college that weekend and also because his campaign did not approve of the recent joint fundraising deal with the DNC. While the agreement with Clinton was the first joint fundraising agreement netted for the DNC, it would prefer and claims it will pursue such agreements with all the candidates.

If you saw another button at the DNC meeting in August feel free to share it here.