Oregon's Earl Blumenauer on the Trail since 1970

Earl Blumenauer has been a fixture of Portland politics since the 1970s. One of the few that has served in just about every level of government offered in Portland.  He got his start by organizing the Go 19 campaign in 1970. This would have lowered the voting age in Oregon to 19. While this effort was unsuccessful, it helped push pressure towards the passage of the twenty-sixth Amendment that lowered the voting age to 18 in 1972.

Winning a seat in the Oregon House of Representatives in 1972 and was re-elected in 1974 and 1976. During this time he was also attending law school and working at Portland State University. In 1978 he won a seat on the Multnomah County Commission and during his term sought a seat on the Portland City Council in 1981. He would lose this race to Margaret Strachan.

It wouldn't be until the late 80s when another opportunity opened up for Blumenauer to vie for a seat on the city council. This time he would win and serve there until his election to congress in 1996.


While I have only one Valentine specific item, the great thing about our hobby is lots of people can share their collections easily. 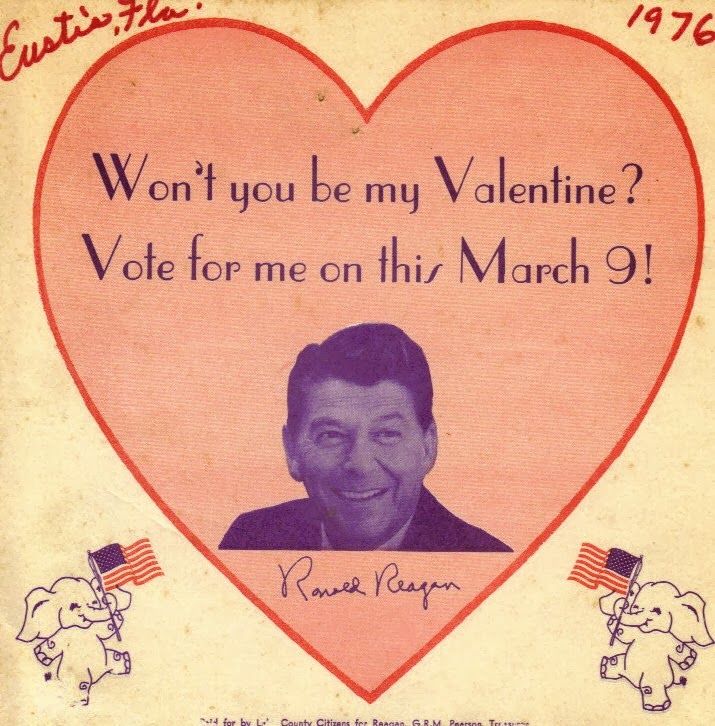 This Reagan card was shared by Joe McClusky. It is from his 1976 campaign.

Here is a Howard Dean related item from my collection. 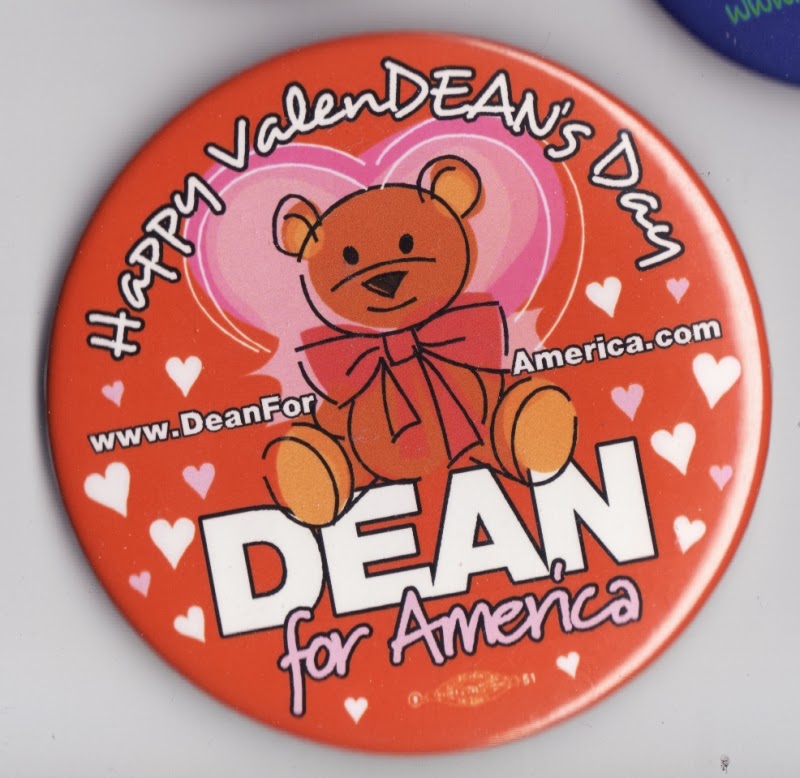 It is 3", and I believe it was made by Graphic Politics.

Reading Into It: Biographies of Oregon Governors

At a recent Oregon Chapter APIC meeting this last year we had the great fortune to welcome Bob Straub biographer Charles Johnson and have a sit down chat with him about his book and subject matter. He signed copies of his book and talked about the dual McCall-Straub dynamic that was prevalent in most state politics in the late 60s and 70s.

The recent winter weather was a good chance to sit back down and take a second look at a couple of the other biographies on Oregon governors. Here are the ones that you can find out there (Mind you it is a small list):

Former President Ronald Reagan turns 103 this year. 2014 marks the tenth year from his passing. He was the first U.S. President to pass away in the 21st century and it happened right during a presidential election. President Bush was overseas in Paris at the time and Democratic nominee John Kerry suspended his campaign until after the funeral. It was the first state funeral I had ever had the chance to see as it was happening. President Nixon was the last President to pass away during my lifetime and had refused a state funeral.

My Reagan collection is very small, maybe not even 100 items. Reagan does manage to fit into several of my collecting interests. His gubernatorial items are always nice, as they fit into my celebrity political collection and then of course his Oregon items. Reagan was also the first President to visit a Star Trek set so that fits down into my Star Trek collection. Today we're going to focus on his Oregon campaign relics. APIC member Winston Blair I think has one of the most well documented modern Ronald Reagan collections.

It may be surprising to many that the same Oregon that voted twice for Barack Obama; for John Kerry; for Al Gore; twice for Bill Clinton and even gave 7 electoral votes for Micheal Dukakis also twice picked Ronald Reagan for President. It's been 28 years since Reagan won Oregon. He was the last national Republican to do so. George W. Bush has come the closest to carrying Oregon. He was 6700 some odd votes shy of beating Al Gore in 2000.

Read more »
Posted by Carl Fisher at 7:00 AM No comments:

Joan Mondale passed away on Monday. She was a veteran of three presidential campaigns, various statewide campaigns for U.S. Senator and Attorney General of Minnesota. She herself was never a candidate, she just ended up marrying Walter 'Fritz' Mondale, who would himself seek the White House in 1984. 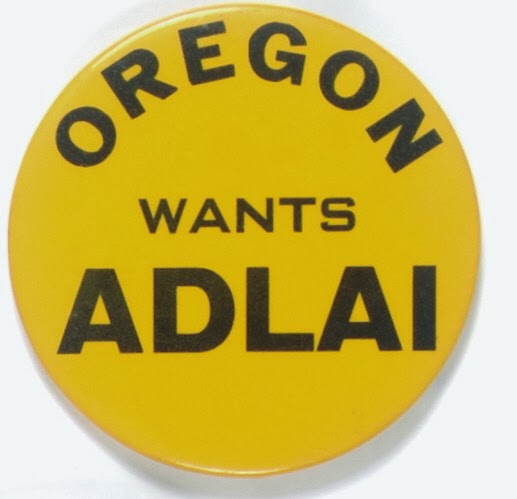 This bright yellow pin recently sold in Anderson Americana #170. You might be surprised that it came in well over $800 dollars when buyers auctions fees are included. It just goes to show that you never know about some pins until long after the election is over.

This fall I had the great luck of visiting a sale at an estate and purchased the only political item I could find. It was a Carl H. Francis matchbook. It is one of the few items I have for Oregon legislative candidates prior to 1960. Francis was first elected in 1942, and this matchbook could be from any election between 1942 and 1954. In 1956 Francis was elected to the State Senate and served at least 1960. He represented Dayton and surrounding areas of Yamhill County while in the legislature. 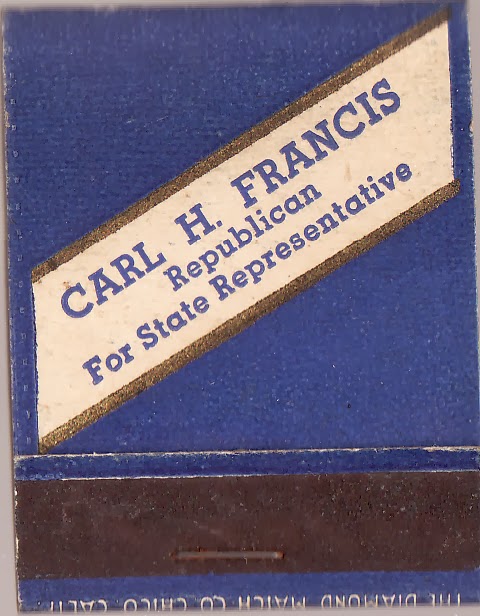 Read more »
Posted by Carl Fisher at 1:14 AM No comments: