In the Spring 2013 issue of the Keynoter, an update is given on a Winter 2012 article regarding Adlai Stevenson famous hole in shoe photograph and the items that surround the famous photo both from the Stevenson campaign and the Eisenhower campaign. Richard Rector and John Vargo both submitted additions. I found another such throwback to the Stevenson campaign.Here is a photo is from Gary Hart in 1984.

Read more »
Posted by Carl Fisher at 3:06 PM No comments:

The late 30s were certainly an interesting time in Oregon. The normally Republican state had swept Democrats into office at various levels during the Great Depression. Franklin D. Roosevelt had carried the state in the last two presidential elections. It was unprecedented in Oregon history. The Democratic party had only carried Oregon twice since statehood in a presidential contest. It had now voted for a Democrat twice in the same decade! The governor, Charles Martin, was a Democrat. Elected in 1934 with the New Deal wave sweeping the nation, he was not a natural ally of Roosevelt. Many Republican business interests were backing him, especially in his dealings with labor and the Bonneville Power Administration.

Read more »
Posted by Carl Fisher at 4:30 PM No comments:

We dug way back for this edition of Collectors Archive; all the way back to 1904! It is from The New York Times. It is regarding the creation of a grand collection of political cartoons and memorabilia from the early days of political campaigns to the modern (1904 remember) times. Makes you wonder if the collection is still in intact after 109 years.

Some of the most interesting and bitter campaign literature in New York just now has nothing nothing whatever to do with this election. Some of the most caustic cartoons have no reference whatever to Roosevelt, Parker, Herrick, or Higgins. A visit to the Lenox Library is necessary to see them, and for students of political history the time is profitably spent.

Read more »
Posted by Carl Fisher at 8:03 PM No comments:

Nothing brings out the crowds in a warm Oregon summer than an all state picnic. During the 1930s, the Oregon Democratic Party held an annual picnic during the summer to build up excitement for going into the fall campaigns. In today's campaign calendars the summers right before an election can be a desert for news and attention. During presidential campaigns, the attention is on the national conventions. The years when there is no convention...like the year after the election, it takes a little more to get the people interested in building the party.

The Democrats of the 1930s did have one thing going for them: FDR. Franklin D. Roosevelt was a unifying figure for both political parties in Oregon. For the Democrats he was the hero of the New Deal, defeater of the Depression, and fascism in Europe. For Republicans of his day, FDR was the embodiment of big government, high taxes, and out of control spending. The New Deal wasn't so great in their view.

It was during these years that FDR was held in such fondness by his party and constituents that his face was put on many party documents. I have been able to find three of these Democratic Party of Oregon State Picnic programs over the years. They are very interesting documents and tell a great story of what people did for recreation as groups. These picnics were highly organized, consisting of many different committees that were in charge of like: The Sports Committee ( I assume they organized the team and individual sports at the picnic), The Honored Guests Committee, The Registration Committee, The Reception Committee, The Hostess Committee...from the looks of it, if there was a job, there was a committee for it.

The whole affair had a State Fair like aspect to it, with contests and awards for activities. There was even a swimsuit competition! With the political correctness that prevails at political events, I doubt a swimsuit competition would have a home at any political party event today....though, perhaps it is time to bring back some traditions. If only Mitt Romney and Barack Obama been forced to dawn their swim trunks and  take a walk down the boardwalk we may have a more laid back campaign in 2012.

It would appear that from the programs I have found, these statewide Democratic Party of Oregon picnics started the summer of 1932. From online newspaper archives, it would appear they lasted well into the late 1970s. The picnics appear to have been held at a variety of locales early on. I am unsure when Oregon Republicans started having their State Picnics and when they stopped, but they were having them as early as 1960, when they invited Barry Goldwater to be the guest speaker.

Here is a story from 1936 that appeared in the Bend Bulletin inviting Democrats to that years picnic. In the article, it references that there will be singing, music, dances, and sweepstakes. Democratic National Chairman James A. Farley was the keynote speaker along with the various candidates vying for statewide office.
The story also mentions the 'bathing beauty contest', "Democratic county chairmen have been solicited for entrants for the bathing beauty contest which will be one of the spotlights of the picnic. The sweepstakes winner will be crowned 'Miss Democracy Oregon'. The Oregon Young Democrats apparently were working on something called 'Justice of the Peace Supreme Court' and had issued over 2000 summons statewide to Democrats to attend.

The picnic tradition is kept alive in Oregon by all political parties, they just don't happen statewide very often. They are mostly done by counties and don't have 'bathing beauty contests' (as far as I know of). These three programs I have received over the years have come from ebay and friends. I am most fond of the 1937 program. The scanner does not do it justice. It is a bright yellow and orange program. The cover art is fantastic, just what you would expect of something from that era. It highlights all the various New Deal expenditures, including Timberline Lodge. 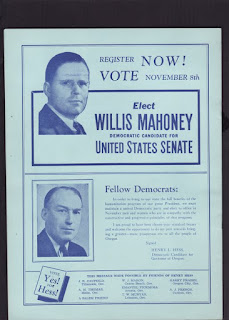 1938 and 1939 programs are relatively bland compared to the fantastic 1937 cover.  The 1938 program contains many campaign ads for candidates of the era, including Henry Hess, who was the nominee for Governor of Oregon that year. It includes an advert for Willis Mahoney, the nominee for U.S. Senate and two women candidates. Nan Wood Honeyman for Congress and Emily Edison for Secretary of State. Students of Oregon history will note that we never had a Senator named Mahoney or a Governor named Hess.

Hess was the Roosevelt backed Democrat in the 1938 Primary, incumbent Democratic Governor Charles Martin was more conservative and against many aspects of the New Deal. In a three way race for the nomination, Hess would eek out a 49%-44%-7% win over Governor Martin and a little known state representative named Henry Oleen.Hess would lose to Republican Charles Sprauge later in the Fall.

I have never seen a Oleen for governor item. Hess and Sprauge items come up fairly often on ebay. If anyone has any other examples of the these Democratic picnic programs from the 30s and 40s that include FDR on them feel free to share. Below is a reception committee ribbon I picked up in Salem this last year. It is from the 1935 picnic held at Blue Lake.