This article originally appeared in the American Locals Political Item Collectors Newsletter in the Summer 1991 issue. It was written by APIC member David Shanton. We have added more photos to supplement the original article and provided a short update on Neubergers life from 1991-2000.

As crass it may sound, for most of our nation's history, the single most direct route to the United States Senate for a woman was through the cemetery. With the exception of Margaret Chase Smith, the ten women who served in the Senate prior to the 1978 election of Nancy Kassenbaum arrived there by virtue of the death of their husbands.


Oregon's Maurine Neuberger was no different. Her husband, Richard L. Neuberger was the first Democrat elected to the Senate from Oregon in 40 years when he took the seat in 1954. His sudden death in March 1960, just days before he planned to file for re-election, left Oregon Democrats in a quandary. Most realized that Maurine Neuberger would be a formidable, perhaps unbeatable candidate, but would she run?

The year was 1959, and the Christmas season was in full swing here in Oregon. Families were gathering and preparing to celebrate the end of a busy year. President Eisenhower was entering his last year in office and candidates from all around the country had been announcing their intentions to run to replace him all year. A late entrant to the Democratic nomination came on December 22,1959 out of Oregon.

Senator Wayne Morse, a man who had been supposedly uninterested in running for President announced his candidacy. Appearing above the front page headline in the Oregonian read: "SEN. WAYNE MORSE ENTERS PRESIDENTIAL RACE". It was a Christmas surprise that some Oregon Democrats loved and other Democrats cringed at unwrapping. There were several factors that led Morse to announce and they all played a part in his campaign. Be it ego, pressure from a citizens petition drive to place him on the ballot, Jack Kennedy's unimpressive progressive credentials, a hope that Adlai Stevenson may still be willing to run at the convention and finally fears that Republicans would place him on the ballot to embarrass him for his 1962 re-election campaign.

Read more »
Posted by Carl Fisher at 2:06 PM No comments:

This great ribbon was recently offered up on ebay from a seller in Iowa. It is from the 1892 Republican National Convention held in Minneapolis, Minnesota and given out to Oregon delegates.

John Kitzhaber, the current Governor of Oregon, has just announced his intent to run for re-election for a historic fourth term as Oregon's Governor. If he wins nomination, he will be only the second person in Oregon history to have been nominated 4 times by a major state political party to run for governor (the first being Bob Straub). If he win in November of 2014 he'd be the first Governor in Oregon history to win 4 terms. The Humprhey School of Public Affairs noted that if Kitzhaber is elected and serves his full four years he will be the 2nd longest serving governor in United States history. Iowa Governor Terry Barnstad comes in at number one and Kitzhaber will manage to beat out Californian Jerry Brown.

As Kitzhaber prepares to take on this feat we'll take a look at some of his campaign items from his last three campaigns, as well as the items of his various opponents over the years. In a well documented political move Kitzhaber met with sitting Governor Barbara Roberts to let her know that he intended to run against her. This event is documented in her 2011 autobiography Up The Capitol Steps gives her perspective on this event. Kitzhaber of course remembers differently and perhaps one day when he gets around to writing his autobiography we will hear his full thoughts on that meeting. The two governors have since put the meeting behind them and Roberts endorsed Kitzhaber in the 2010 general election.

Read more »
Posted by Carl Fisher at 2:40 PM No comments:

He served as district attorney of Multnomah county from 1970-1972. Connall was defeated by Haas for re-election as DA in 1972. Here are two pins from his 1972 campaign. 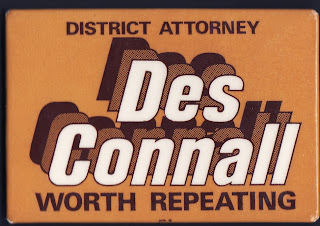 Read more »
Posted by Carl Fisher at 9:27 PM No comments: