John Vargo had an excellent article in the Fall 2013 issue of the APIC Keynoter about the startings of the various movements of the 1964 election prior to the death of JFK. There are several really nice paper items put out by the RNC and pro-Goldwater forces advocating to retire 'The Kennedys'. The thinking was that if the GOP did a good job in the 1964 elections, JFK and RFK would be out of the White House and 'Teddy' Kennedy would be defeated in the Massachusetts Senate race. Two bumper stickers featuring the famous rocking chair and a RWB item from the Midwestern Regional Leadership Conference that was taking place in St. Louis, Missouri. The conference was taking place November 22-23, 1963. At similar conferences a set of three rocking chairs would be set up near the lobby of the conference for display.

Vargo's article mentions a mailer the RNC started sending out to raise funds for JFK's retirement fund. Upon some further research, it was discovered that some Republicans in the early fall of 1963 took this solicitation request seriously and were not very happy about it. The Toledo Blade covered one such Utah Republicans response to the fundraising request. The RNC wanted individuals to donate $10 dollars to help fund efforts for the party at defeating JFK in the upcoming election. A man in Utah sent back his mailer to the RNC with this response, "I think this is silly. Why can't the Kennedys live on the liberal provisions provided for upon retirement the same as Hoover, Truman and Eisenhower are managing to do? I'm not interested in contributing to any additional retirement fund for them."Sometimes things just go over our heads.

Read more »
Posted by Carl Fisher at 4:51 PM No comments:

A Time For Greatness

Here is an example of a JFK Oregon campaign poster. 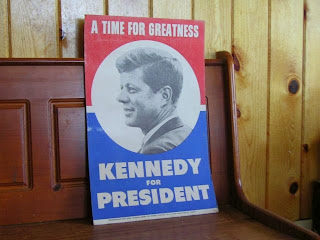 This poster showed up on ebay a few months ago, and it was the first time I had ever seen this style of poster in an Oregon version. It looks to be printed on heavier cardboard stock and has the Oregon campaign information on the bottom. 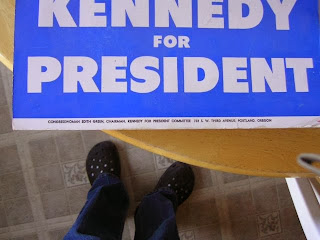 With the approaching 50th Anniversary since JFK's passing I went through my collection and pulled out all my JFK pins. It isn't much, but when you've been in college and working part time for the better part of the time you've been collecting you don't get much of a chance to get some of the 'good stuff', as JFK items have always been desirable.

Oregon member Grant Schott wrote up a great recap of JFK's visits to Oregon in the lead up to the 1960 Oregon Presidential Primary over at BlueOregon (one of the leading political blogs of the state).

With Veterans Day 2013 soon upon us, it seemed appropriate to look at some of the political items used by and to appeal to veterans during our heated political campaigns. 2012 marked an interesting moment in American politics. It was the first time that none of the major candidates were veterans themselves. John McCain was the last veteran to be nominated by a major political party back in 2008.