Who Was Delegate Jim Harrison?

In my collecting adventures recently I came across this John F. Kennedy 1960 delegate badge owned and worn by Jim Harrison. It didn't take me long to find out more information on Harrison. 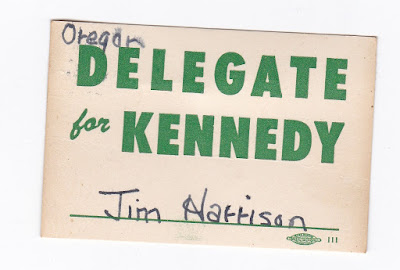 You can read about his candidacy for delegate here in the 1960 Voter's Pamphlet on page 45.


From what we know of him, he worked for Congresswoman Edith Green in the late 50s and early 1960s. He was Secretary and eventually Chair of of the Multnomah County Democrats in the mid-50s.
Harrison touted his first hand experience and knowledge of the all the current Presidential candidates since he had worked in the House and Senate and personally supported Kennedy for President and Humphrey for Vice President. It is no surprise that he supported Kennedy. His boss, Congresswoman Edith Green was the Oregon Chair of the Kennedy Campaign.

Aside from what is mentioned in his delegate VPS, I have been able to find no other info on him. If you know of any more information please feel free to post it.