With the passing of Arizona Senator John McCain, I thought it might be interesting to look at some of the political items generated by his campaign, especially the Oregon items. During the historic 2008 presidential election, McCain made one swing through Oregon right before the May primary.  Yet, he still managed to make it to the Beaver State several times before and after his 2008 presidential run.

John McCain found himself standing next to Oregonian Gary Hill in one of the most widely used photos of a young John McCain completing a flight training. The photo was used a lot during his 2008 campaign. The Bend Bulletin covered the life of Gary Hill and his connection with McCain in this article.

We know, thanks to Jeff Mapes that he came to Oregon in 1993 to headline an Oregon Citizens Alliance fundraiser in Portland. You can read about that here: McCain 1993 visit.

Part of the deal for McCain coming to headline the dinner was to help keep Bob Packwood from getting a social conservative primary or third-party challenger in the '92 campaign. Lon Mabon, the leader of the OCA would eventually run for the U.S. Senate in 1996. Finishing with only 8% of the Republican Primary vote. Here is a Mabon for Senate button. McCain kept his word, even if Oregon's other Senator, Mark Hatfield was suggesting he should back out.

In the recap from Jeff Mapes, it mentions Chair of the Oregon Log Cabin Republicans, Mr. Lee Coleman. I know Lee Coleman. By the time I had met Lee he had become a Democrat and was running for the Oregon House in district 26 in 2006. Here is a photo of his button from that campaign.

This visit was unusual because you don't necessarily equate the views of John McCain to the Lon Mabon crowd. He made sure his speech set an appropriate tone that would not offend his hosts nor his supporters that fundamentally disagreed with the OCA. We learned that McCain also met with other local leaders from the NAACP and the local Jewish Federation to help smooth things over. The Seattle Gay News covered more of the speech and fallouts in a 2008 post around the time of the Democratic National Convention.  As soon as he was done with the dinner he bolted for his plane.


I am still looking for articles that mention John McCain visited Oregon for his 2000 presidential campaign. The official results of the 2000 Oregon Primary indicate he did not appear on the ballot. He had suspended his campaign in March of 2000 after a poor showing in the Super Tuesday contests that year. Alan Keyes did contest Bush in Oregon and won 3 delegates for his efforts.

McCain did make at least one trip through Oregon during the summer of 2000 to appear at a rally with then-Governor Bush and Oregon Senator Gordon Smith. The rally was held at Portland State University on August 11, 2000. View the Rally thanks to CSPAN.  It appears from the video John McCain has gum while giving the speech in Portland. McCain makes a bold prediction that the Bush-Cheney ticket will carry California, Oregon, and Washington. That never happened, but Bush and Cheney did go on to win one of the most controversial elections in American history in 2000.

I have yet to see any materials from the 2000 McCain campaign in Oregon.

McCain was set to come to Oregon on August 1, 2007, to headline a fundraiser for Senator Gordon Smith in downtown Portland at the Heathman Hotel. Smith was going to be running for re-election in 2008 and was seen as vulnerable by the national press and pundits. McCain ended up canceling his appearance.

It seemed pretty obvious that if John McCain ran again for President he would more than likely be the nominee. I can recall taking Citizen McCain by Elizabeth Drew with me on the plane to work for John Kerry in the 2004 Iowa Caucus. Throughout 2004 there had been speculation about a Kerry-McCain ticket keeping the presidential fires glowing after that election.

There appeared to be a four-way race for the nomination at the outset. It was probably one of the most dynamic Republican primaries we had seen in the 21st Century. McCain, Mitt Romney, Mike Huckabee and Ron Paul were all vying for delegates and McCain, Romney, and Huckabee seemed to be picking up victories with every election night. McCain would eventually pull ahead and by the time of the Oregon Primary had been endorsed by most of his former rivals.

He and Ron Paul would appear on the Oregon ballot and McCain easily held off Ron Paul winning 80% of the vote and 23/27 Republican delegates. Here is a list of the Oregon McCain Committee.

McCain made one visit in Oregon before the primary. It was, for the most part, a fairly standard campaign visit.  It seemed to be more controversial for Oregon Democrats than anyone else. Oregon's Democratic Governor and Hillary Clinton "Superdelegate" Ted Kulongoski was a special guest of McCain at a speech he gave about climate change and energy independence.
Oregon Democrats had some grumbling about their governor appearing behind a McCain for President sign. It contributed further to the rift of Obama and Clinton supporters who felt that Kulongoski was signaling that he would rather support McCain than Obama if Clinton ended up losing the nomination. The fears of the Obama supporters proved to be unfounded. Kulongoski and many of the Oregon for Hillary team would go on to help stump for Obama across the state after the Democratic National Convention. You can read the full text of the speech here.

McCain had not officially received the Republican nomination at this time and was merely the presumptive nominee.  Only Ralph Nader and other third-party candidates would visit Oregon after the party conventions.

Here are examples of the 2008 Convention buttons used by the Oregon delegation.

I don't know why John McCain wasn't included on the 2008 Oregon RNC pin like the DNC pin had Obama on it, but that is what I have been able to find from the 2008 RNC Delegation. The only Oregon McCain buttons I was able to find were from the McCain campaign store online.

Paper items were even more scarce in Oregon for the McCain campaign. I went to the local Washington County field office and this was the only handout they could produce. 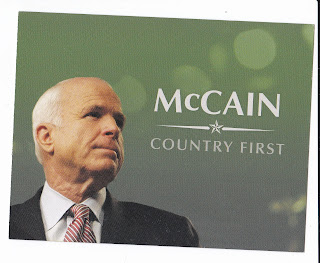 I did find an interesting Sarah Palin related item in 2008 at the GOP office. They told me a member had donated them and the party was giving them out.

While I'm sure many believed the slogan, I'm not sure McCain himself would have approved the design. 2008 Oregon McCain items are few and far between. If you have something from his Oregon campaign please feel free to share it.

McCain had finally won the nomination and was the Republican nominee in a year no one seemed to want a Republican to be President. His Communications Director towards the end of the campaign was a graduate of the University of Oregon. By November of 2008, it was clear to many that John McCain was not going to be elected President of the United States. Even his campaign manager felt to make a joke in the waning hours of the campaign about campaigning through election day to Oregon. He said 'it's been closing. Go, Ducks Baby.'

It turned out not to be so close in Oregon. Obama carried Oregon 57%-40%. Even John McCain could not help Gordon Smith hold onto his Senate seat. Smith lost to Oregon House Speaker Jeff Merkley.

We know that John McCain made at least one trip to Oregon after the 2008 campaign dust had settled. In 2014 he came to the aid of Republican Senate candidate Monica Wehby. He made several campaigns events for her while he visited the state. I have seen no promotional items from his visit in 2014. Here is a video from one appearance in Gresham.  The Statesman Journal covered the October 2,  2014 visits.

Wehby would end up losing to Jeff Merkley and he would earn a second term that year. Aside from this last visit, I have been unable to find any more info about visits in Oregon.

Here they are in chronological order:

If you have an interesting John McCain Oregon campaign item please feel free to share it here.