Picked up this bumper sticker from the successful 1954 campaign of Richard Neuberger. He was the first Democrat to be elected to the U.S. Senate from Oregon since 1954. He won by a little over 2,000 votes out of half a million cast in the election.

He served along side Wayne Morse, and their famous feud is well documented. A noted journalist of America, the Pacific Northwest and politics. Nueberger was a natural storyteller. He wrote many articles for dozens of publications during his life. Some were even collected into books. I have not had great luck finding Neuberger for Senate items over the years. This was the first thing on Ebay I think I have ever purchased for Neuberger.

Most of the time you can find the Conservationists for Neuberger items. There is a seed pack that was designed for sportsman to disperse in the wild to make up for the grass they trample on while hunting. The other item that has been seen frequently in collections is the Conservationists for Neuberger tab. Blogger Andy Kerr has written a little bit about Neuberger's conservation work at his blog. 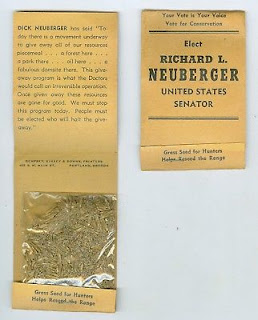 Here is a photo of one of the versions of the seed pack. 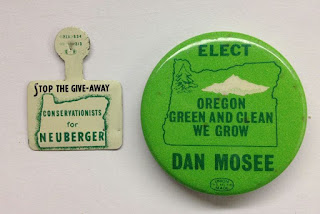 A photo found online of the Conservationists tab.


OR-APIC member John Silvertooth recently sent us in this photo of a mule at some sort of political meeting either during 1954 or 1956 with what appears to be the mule wearing a banner or other covering with one of the Neuberger for Senate bumper stickers on it. 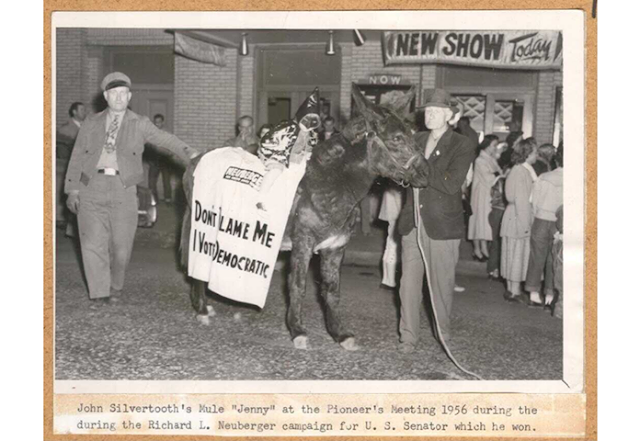 This appears to be outside from sort of meeting or show hall. Perhaps they were there to hear Neuberger speak during his historic 1954 campaign. The photo says 1956, but we are unsure why they would have a Neuberger sticker on the mule.

If you have any Neuberger items please share them with us!
Posted by Carl Fisher at 5:35 PM