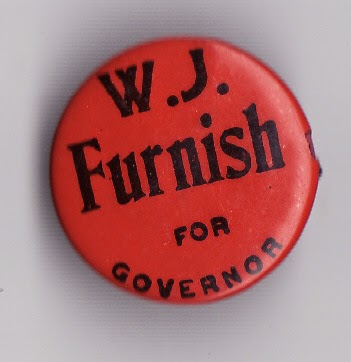 Got this W.J. Furnish for Governor lapel stud on the Political Memorabilia Exchange founded by APIC members on facebook. There is a matching button to this lapel stud. Furnish was the 1902 Republican nominee for Governor. He unseated then Governor T.T. Geer and two other opponents at the Republican State Convention in Portland that April. Geer and another candidate withdrew before balloting leaving Furnish and H.E. Ankney to campaign for the votes of delegates.

Furnish easily swept the convention netting 248 votes to Ankney's 92. The party Platform that year held fast on the US sovereignty in the Philippines, united fully behind President Roosevelt's fight against 'gigantic combinations of incorporated capital', the passage of the Chinese exclusion act, the creation of a Department of  Labor  and position on the Presidential Cabinet,  popular vote of Senators, and many other interesting positions.

Furnish was a Banker by trade, so he made for an interesting spokesman for a branch of T.R.'s Republican Party. Furnish would lose to George Chamberlain 41,857 to 41,611.That is a just .03%, making it the second most competitive gubernatorial race in Oregon History. The Humphrey School of Public Affairs lists the current top five races for Oregon Governor. The total turnout in that race is a little over the number of registered voters in two Oregon House Districts in Washington County.

The stud itself is typical of the lapel studs you could find from 1896 and 1900. I'm not sure on the value or how rare it is. I paid 10 dollars for mine (including shipping) The button can also be found for around that same price. Makes you wonder if there is a George Chamberlain stud out there?
Posted by Carl Fisher at 4:04 PM