Keynoter: The 'Holy Grails' of U.S. Senate and Governor Items

In the Summer 2013 issue of The Keynoter, contributor David Quintin writes about what he calls the 'holy grails' of locals items for senate and gubernatorial candidates across the country. These items of difficult quest have sometimes only been spotted once out in the wilds of the hobby. This doesn't mean that it is the only known example, just the only known example that has risen to the surface. Like a Cox-Roosevelt jugate, someone could have a bag of them in their grandparents trunk that sits up in the family attic.

One Oregon pin made the cut for the holy grail category. It was a third party item. R. R. Ryan of Oregon. It is a 7/8" celluloid (see above photo). In 1902 he ran for Governor of Oregon against George Chamberlain, and W.J. Furnish. In 1910, he was a nominee for Supreme Court Justice. His full name was Robert R. Ryan. He was born in 1846, and died in 1926. He served during the Civil War for the Union Army in the Illinois 61st infantry under the command of Colonel Jacob Fry. Like many men of his day he was active in his local Grange, G.A.R., and his church.

In his obituary from the Capitol Journal, it states that Ryan authored a bill that was approved by the G.A.R. and was to be introduced by Senators Borah of Idaho and McNary of Oregon in the next session of Congress for Veterans Pension Bill. I have not been able to ascertain which pension bill this exactly is, the only bill that comes up on a google search involving McNary is a pension bill H.R. 8132 from 1926 during the 69th session of Congress. It is possible that this is the same veterans pension bill President Hoover would eventually veto in 1930. 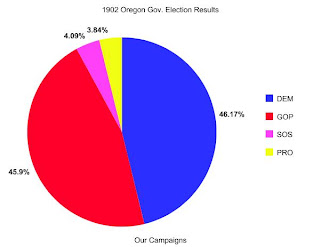 Nothing is mentioned of his various runs for public office. We know that in 1902 he ran for governor and finished third behind winner Democrat Chamberlain and Republican runner up W.J. Furnish. Ryan did manage to beat Prohibition Party candidate A.J. Hunsaker.

It would be interesting to see if anyone else has any info on Ryan. So Oregon collectors, do you think this Ryan pin from 1902 qualifies as the 'holy grail' of Oregon collecting? Is there another Oregon local items that should take its spot?

How about the Oregon Chapter of the APIC submit an article of the Top 10 Oregon political items. What would do you think ought to be in the top 10 Oregon local items? I think the list must include the Eisenhower-McCall poster from his unsuccessful attempt to beat Edith Green for Congress in 1954.
Posted by Carl Fisher at 10:31 PM