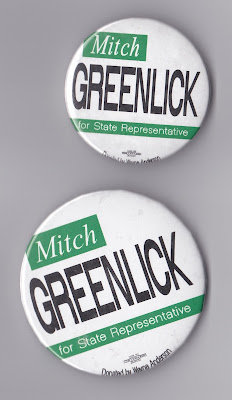 In 2016 Greenlick wrote a book called Capitol Letters: An Inside View of the Legislative Process. He writes about his involvement in politics, parties, and the legislature. Greenlick is Chair of the House Healthcare Committee and has pushed for a number of healthcare policies over the years drawing on his long career working in healthcare research and administration. There is a forward by Congresswoman Suzanne Bonamici. One of the telling things that reveals a little of Mitch Greenlick's personality is he comments 'debating is fine, but passing bills is finer'. I picked up a copy of the book at an event and had the author sign it for me.

Here is a video from the Oregon Capitol where Mitch Greenlick gives a talk moderated by Oregon Historical Society Executive Director Kerry Tymchuk.