Mystery of the DNC Badge

I stumbled upon an interesting find in the wilds of Oregon. This 1972 Democratic National Convention delegate badge and ribbon. I purchased it from a woman in Dayton, Oregon. She had purchased it from an estate seller in Salem, Oregon who told her she had picked it up at a storage/estate sale in Salem. 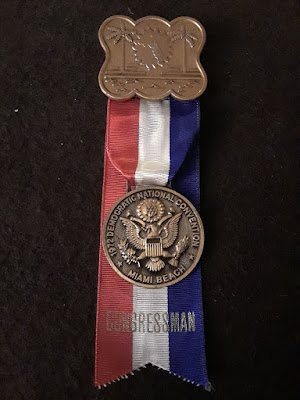 What caught my eye about the badge was that it was labeled 'CONGRESSMAN' and issued to Democratic members of Congress that attended the DNC that year. In 1972 Oregon only had two Democratic members of Congress. Edith Green from Oregon's 3rd Congressional District and Al Ullman from Oregon's 2nd Congressional District.  After speaking with several delegates who attended the convention that year from Oregon I was able to piece together that no one seemed to recall Ullman attending the convention and that the likely owner of the badge was Edith Green.

Several Oregon collectors have commented that towards the end of her career and life Green auctioned off or sold many of the political items/mementos she had picked up over the years. It is very possible that this convention badge, which is in pristine condition, was probably sold at either one of these auctions or her estate sale in the late 1980s.

Whatever the case may be with this badge, I knew that if the possibility existed that it belonged with Edith Green I had to save it from wherever it might end up. I took a chance and purchased it (after haggling down the price a little bit).

The 1972 Convention and the 2020 Convention will probably have a little in common. The Democrats will most likely have a wide field of candidates, new rules will have put into place from the DNC 2016 Unity Reform Commission (much like new rules were in place from the 1968 McGovern-Frasier Commission for '72) to make the process more open to rank and file Democrats. Just this weekend the DNC Rules Committee voted to begin this process. This involves reducing the  influence of so called 'super delegates' or automatic delegates to the convention. Let's also not forget that just like in 1972, 2020 will have them facing off with an incumbent Republican President.

What do you think of this badge? Do you think there is a good chance it belonged with Edith Green? I have met many Oregon collectors that purchased items directly from her estate. It seems very possible this was really hers.
Posted by Carl Fisher at 11:56 AM