Looking for help from the community on ID'ing G. Lueddemann. He apparently attended the the 1964 Republican National Convention that nominated Senator Barry Goldwater. Was he a delegate? Alternate? Staff? Press? Very curious to find out more information. 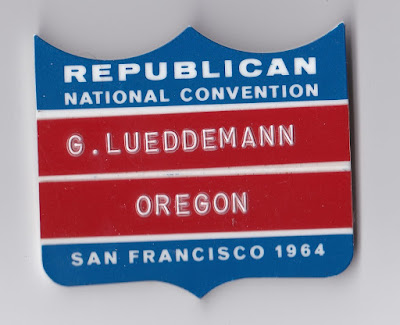 Was this person a Goldwater delegate or a delegate pledge to Nelson Rockefeller the winner of the 1964 Oregon Primary?  Goldwater tied for third place in the primary with Richard Nixon who was not an active candidate. Will have to wait for more information.
Posted by Carl Fisher at 8:00 AM