Now just a look back at some of my favorite items I have picked up over the last year! Many are Oregon, but some are from other places. 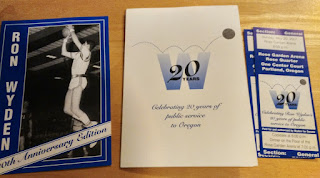 Ron Wyden 20 years of public service invite and tickets. I thought these were some of the best Ron Wyden items you can find (outside of the basketball that keeps eluding me). When my friend Wayne decided to close up shop here in Oregon and move back to Maine to be closer to family I wound up with a set. 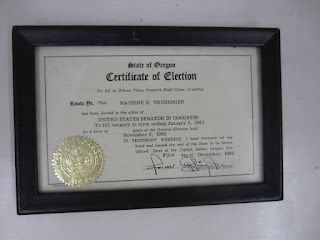 This Certificate of Election was purchased off ebay. How some of this stuff makes it way to the internet is beyond me. I thought something like this would have ended up in a Neuberger archive someplace like the Oregon Historical Society or a university. This certificate is from when Maurine Neuberger was elected to complete the term of her late husband. She was elected to the US Senate twice in 1960. Once to fill the slot of her husband and then for the regular term that was to start in January of 1961. 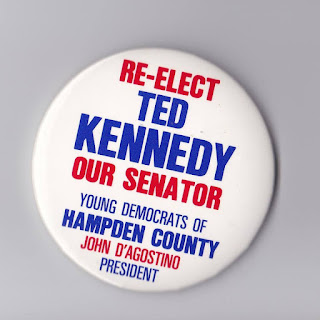 I haven't added many Ted Kennedy items to the collection this year, but I was able to find this wonderful pin through a friend. Haven't been able to find any info yet on John D'Agostino. 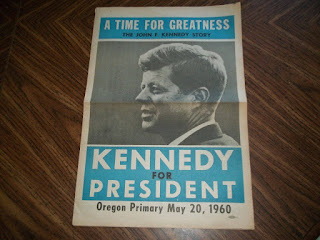 A classic Oregon newspaper insert from 1960. Had been looking for one of these for several years and was finally able to snag one from someone in South Dakota of all places. 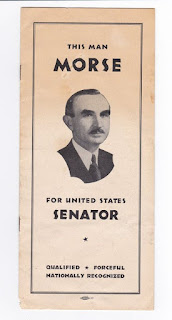 Another item from my friend Wayne. A very early Wayne Morse for Senate item from his first campaign in 1944. This is from one of the two campaigns Morse ran as a liberal Republican before switching to Independent and then Democrat. Morse for Senate items from the early years are very tough to find. It is one of only two items I have from his 1944 campaign. 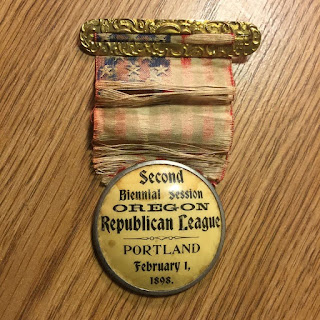 This was by far the oldest Oregon item I picked up in the last year. I haven't done too much about this item or the convention it mentions, but a quick google search found an article written by H.R. Kincade that discusses some of the work taken up at the convention. He wrote an editorial critical of the Republican Party from back peddling on their commitment to 'bimetallism'  they had put in their platform at the RNC in 1896 and then after William McKinley had been elected started to favor the Gold Standard. The Oregon Republicans in 1898 also became in favor of the gold standard. In two years, McKinley would sign the Gold Standard Act. More research to come on this item. 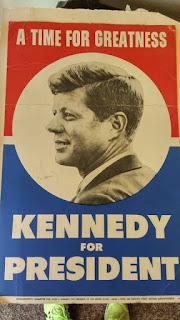 This is probably the best item I picked up because of the mass appeal of the item. A signed JFK poster. The seller believed his mother had picked it up while Senator Kennedy was campaigning in Oregon. I took it to the Antiques Roadshow when they came through Portland this summer and they really liked it. 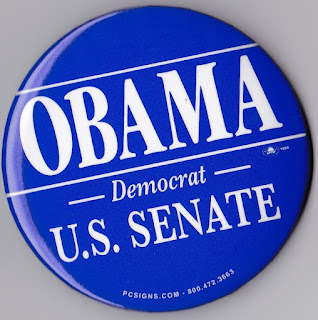 I waited til after President Obama was out of office to be able to afford a button from his historic 2004 U.S. Senate campaign, in fact, I ended up getting 3 different Senate buttons this year. I liked this one a bit more, and I don't think I paid more than $25 dollars for either of them. During his first few years in office these pins would easily fetch $40-$60 dollars, if not more. Now the prices seem to be coming back down to realistic values. 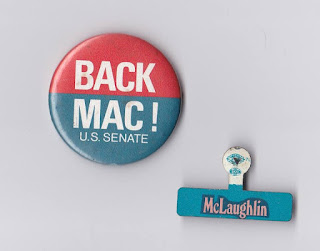 Probably one of the most recognized political commentators and media personalities of his era, John McLaughlin hosted a political round-table discussion program for thirty-four years called The McLaughlin Group. What many did not know was that he ran for the United States Senate in 1970 in Rhode Island. I picked these items ups this year from his one foray into electoral politics. Not only did they fill a spot in my media/celebrity collection, but McLaughlin was also a guest on Saturday Night Live. I collect political items from guests and hosts that have appeared on SNL over the last forty years. 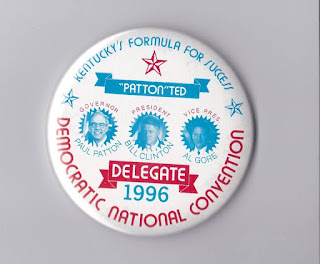 This was a very special button. It features former Kentucky Governor Paul Patton. Paul is the brother of a dear friend of mine and for years she would tell me of her brother the governor. I never had any proof in the form of campaign items, but this year I picked up this cool DNC Kentucky Delegate pin from the 1996 convention.

I hope you will consider sharing what your favorite items from 2017 were with us!
Posted by Carl Fisher at 7:38 PM