Another Good Friend of Bonamici

As is often the case campaigns run out of swag between elections. Members of congress run for office every two years and go through lots of bumper stickers, buttons and campaign literature. In 2014 the campaign of Suzanne Bonamici issued some great 'Another Good Friend of Bonmaici' buttons and matching bumper stickers. They also have t-shirts with the same logo.

They ran out between the 2014 and 2016 campaigns of the buttons and stickers and re-ordered more for this year. It turns out they must not have used the same place to order pins as you can see from the photo below the two union bugs are different.

The bumper sticker on the left is from 2016 and the one on the right is from 2014. Just minor differences. The lettering is filled in with white and the is surrounded by bright yellow band.

In 2014 Bonamici won renomination in the Democratic primary against no organized opposition. She would go and defeat Republican Jason Yates and two other minor party candidates with 57% of the vote. During the 2016 campaign she faced challenger Shabba Woodley in the Democratic primary. Bonamici took 90% of the vote. The only item found from Woodley's campaign is this small business card. 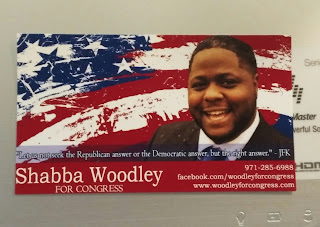 I haven't seen anything aside from lawn signs and car magnets for her 2016 Republican challenger Brian Heinrich. One of the biggest issues of contention during the primary was Bonamici's support President Obama's pro-Trans Pacific Partnership Treaty.

The general election campaign has been relatively quite, as Bonamici is expected to win again by similar margins from 2014. If you have items from the other candidates please feel free to send us some images.