Here are the buttons that the Hillary for America campaign has been selling on their website for the last several months.

Some of the first pins issued by the campaign were logo pins that utilized the H logo. 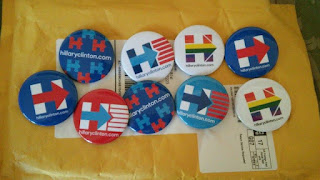 The second wave of pins came out this fall 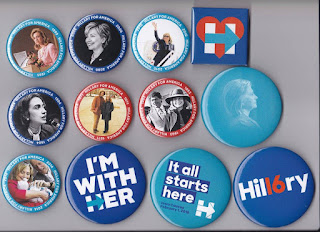 The photo pins, a set of 7 show Hillary from various points in her life. The website sells the set for 15 dollars.

All the other pins are sold in groups of 2 for 5 dollars. The only pin no longer sold is the 'It's all starts here' Iowa caucus pin. It was only sold for a limited time prior to the Iowa Caucus. It was sold in a group of 2 pins for 5 dollars as well.

Three new sets of pins have been uploaded to the store in the last week. A set of 6 1" pins, a 3" set of pins that say '#HillYes!' and finally a new set of 3 pins called the 'Making History' set.

All can be found on campaign website. As we get more pins from the official campaign stores we will start to post about them.