Some new national items found their way in my mailbox two weeks ago. I don't usually go out of my way to purchase items from other states, but these were convention and single day event related so I went for them.

I posted a few images on the APIC facebook page and got some responses. While they are fairly uncommon and even a rare one or two, because they are mostly Gore related items they do not set the hearts of collectors afire with need. Most were between $5 and $15 each. One pin did draw me to the lot a little more. It was this Gore Family BBQ pin from 1997. 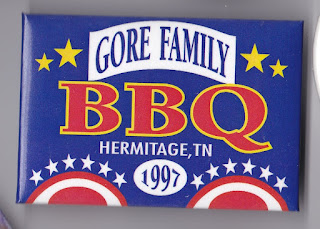 I have found only two brief mentions of the 2nd Annual Gore Family BBQ from clippings in 1998, but nothing on the 1st Annual Gore Family BBQ, which is apparently where this pin is from. What was the purpose of this BBQ? Was it to help organize his partisans in Tennessee to keep them focused on 2000? Was it to raise money for local candidates? If you can find a newspaper article from the period, I would appreciate seeing it.

Gore items from 1996-2000 intrigue me the most of any Gore items. I have seen items promoting Gore for President in 2000 as early as 1997, on the heels of finishing the 1996 election Gore and supporters got to planning his 2000 effort. If you have any Gore 2000 items that can be traced to this time period please feel free to share them.