When looking over my Wayne Morse items I am always perplexed at how few items from his 1962 re-election campaign I have been able to find outside of brochures. There are two postcards that look pretty much the same from the front, but on the reverse have two separate layouts.

The front of these two cards look very similar, they both feature Morse standing next to a globe holding his glasses. One is slightly wider and shorter than the other.

Here is the photo that appears on the card 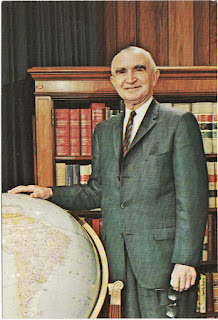 On the reverse of the wider one there is no place to put a stamp, like on a traditional postcard, almost as if it was just made to be given out. 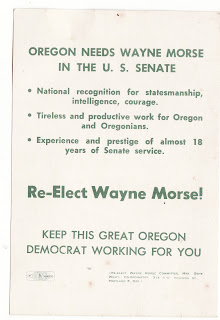 The more traditional postcard item features the same information, but also includes a place to address the card and give a quick note from the sender. 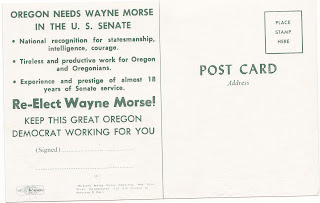 The more traditional card can be found a lot easier than the first card pictured. It has turned up online several times in the last year.

1962 was the last time Wayne Morse defeated a Republican in a General Election. We've written about his opponent in the past, Sig Unander.
Posted by Carl Fisher at 12:54 PM