I have few items in my collection that come with as interesting of a story as this small Thomas Dewey for President foldout brochure. 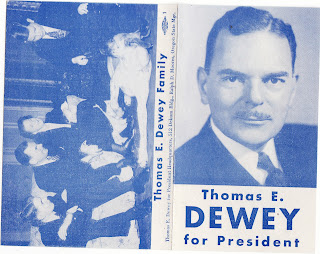 It is an Oregon Dewey item issued during the 1948 campaign. I have no idea how rare this item is, but even if it was a common item, the place it came from gives it all the significance. APIC member Paul Bengston from Minnesota had a chance to go a sale of former Governor Harold Stassen's storage unit after Stassen passed away.

Stassen was the 25th Governor of Minnesota and frequent candidate for President of the United States. He ran in every Republican Presidential Primary from 1944 to 1992, the closest he came was in 1948. It was during that campaign that the Oregon Republican Primary took center stage and Stassen was doing very well having won several early primary contests. Here is an account from Cascade Locks where the two campaigns briefly met in the small community set in the beautiful Columbia River Gorge. Dewey and his campaign bus were on the road to Portland, while Stassen and company were on the way to The Dalles for campaign events. 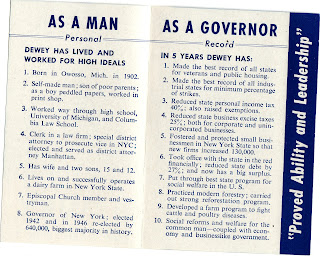 According to Mayor Russell Nichols of Cascade Locks, they had let the kids out of school that day to greet Governor Dewey. When his bus failed to stop, he swapped his Dewey button for a Stassen button. Governor Stassen was more than glad to stop, shake hands and sign autographs. The Dewey campaign believed it would have been inappropriate for them to stop and steal another candidates thunder.

3 days later the two men would face off at KEX studios in Portland for the first modern day, nationally broadcast presidential debate on the eve of the Oregon vote. Now known as the Dewey-Stassen Debate. I sometimes like to imagine Governor Stassen sitting down to prepare for the debate and using this small Oregon card. Maybe he kept it all those years as a reminder of all the accomplishments in his life? And how some dreams remained unfulfilled.

Dewey would end up using the debate to resurrect his campaign. He chose the topic: "Shall the Communist Party be Outlawed?" It would be interesting to point out that this was not a modern day presidential debate where the candidates just deliver their stump speeches in sound bite size. This was an actual debate, where one person took the affirmative and one person took the negative. You can read more about the debate by clicking the link above. Below is a portion of the video I found of the debate at KEX.

A great little campaign item, with a wonderful back story. Dewey of course would go on to defeat the insurgent Stassen and go on to face Harry Truman in the general election. He would win not only the Oregon Republican Primary, but also Oregon when running against Truman. Oregon was one of only 5 states Dewey would win west of the Mississippi. Have a Dewey or Stassen item from the 1948 Oregon Primary you want to show off, send us a photo!
Posted by Carl Fisher at 11:39 AM