Photo is Morse of Course!

An old newsprint photo has been causing some discussion amongst collectors on the APIC facebook page. I was searching for photos used in newsprint of collectors and their collections when I stumbled upon this photo of Emanuel Ress from 1960. He is inspecting laminated prints for 1960 presidential hopefuls that he plans to sell to the public. As you can see there are pins for Nixon, Kennedy, Johnson, Humphrey and several for Senator Wayne Morse.

Morse of course, was the Oregon Democrat running for President in the 1960 primaries. While he was only officially on the ballot in three contests (Maryland, DC, and Oregon) he claimed to have organizers working for him in most states that held state conventions to select delegates. I am a huge Morse fan and wrote my last political science paper in college on his 1960 effort. I have so far been unable to find ay firm details on these various efforts outside of those three mentioned above, but, like so much political organizing today it may have gone largely unnoticed.


Ress was a salesman at heart. He knew how to sell buttons to all; regardless of political party or candidate. There are many articles from the 1950s and 60s covering his exploits selling politics to the masses. Here is an interesting story about being stuck with 100,000 Nelson Rockefeller buttons after Rocky dropped out of the race as a contender. Ress was known to claim 'I don't care who wins. My business is buttons.'

In this photo you can clearly see a Morse prints waiting to be cut and made into buttons. This image matches up nicely with a mystery Morse pin that there is some disagreement between collectors on. This is the button I believe it to be (it is also one I lost on ebay a few years ago) 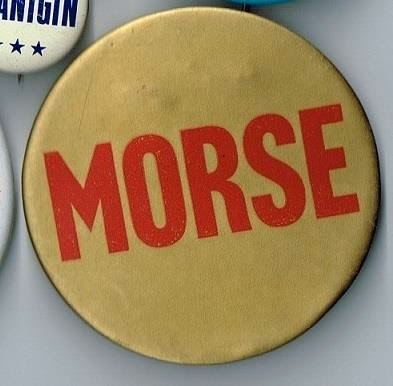 A lot of discussion was generated from the post on Wayne Morse (from a bunch of non Oregon and Morse collectors) which was really neat to see collectors interested in discussing Oregon items! so does this look like an item that could have come from Ress in 1960?

One noted Oregon collector thinks this isn't a Wayne Morse item and that it doesn't have a union bug or anything on the curl, Ress would have noted that it was one of his pins somehow. It is very possible this could be the case, but there is some more evidence to support that this was a Ress pin.

There is another well known Ress Morse pin from 1960. This version is considered a prototype (how this conclusion was reached is unclear). Sold in Old Politicals #5 Note the stamp of Ress! Note the raised portion under the pin. 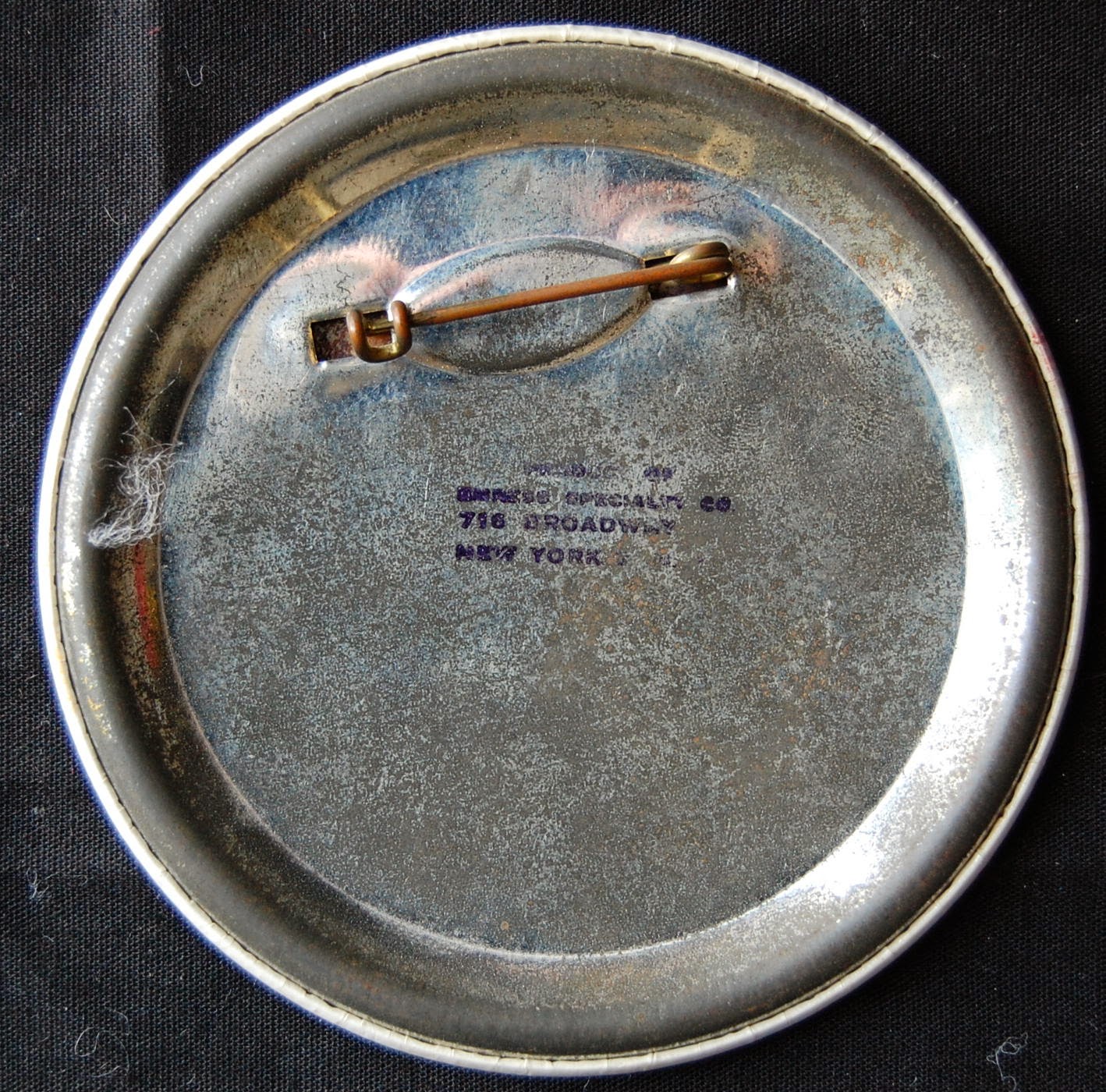 And here is the face of the pin. 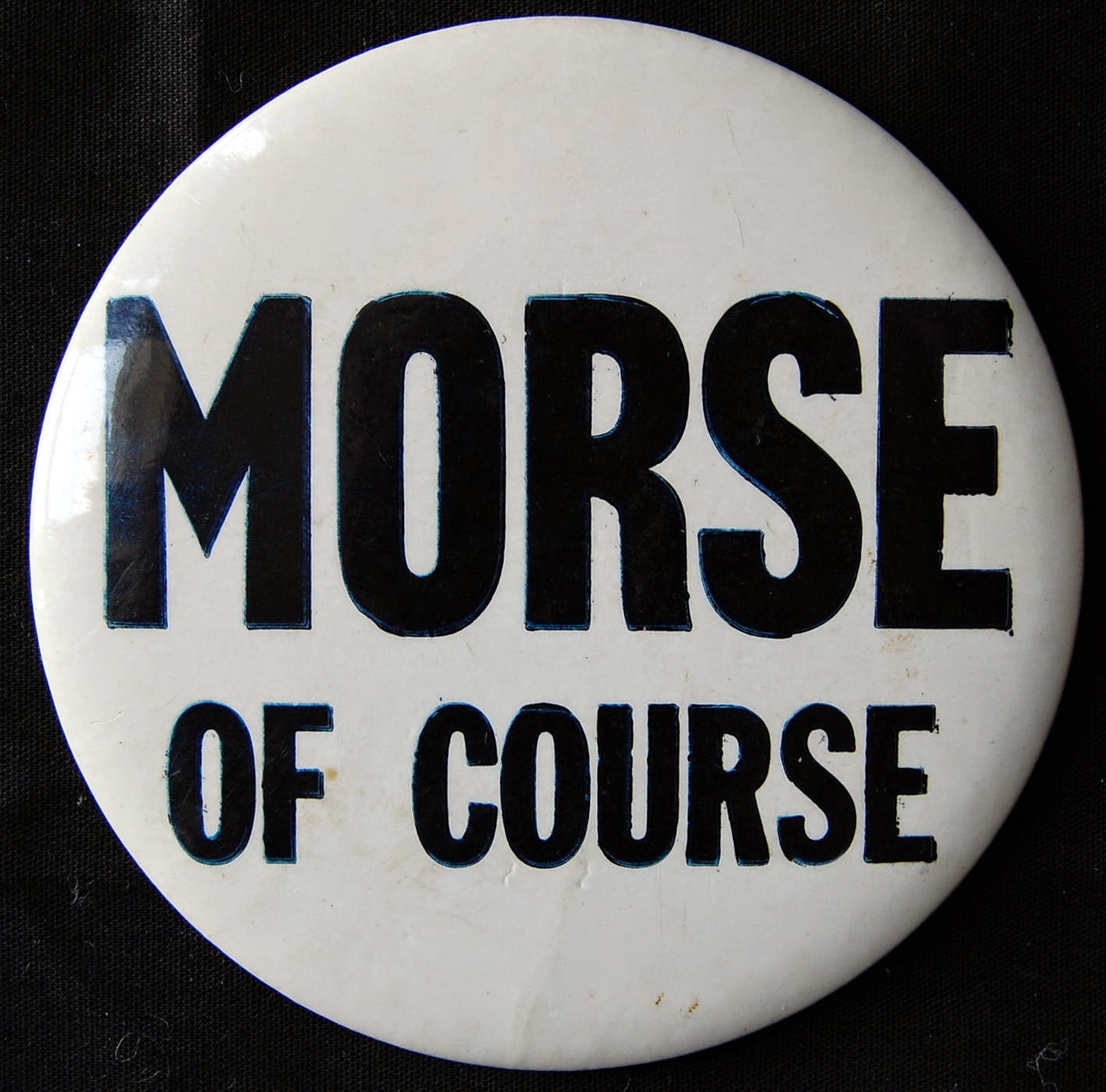 While one of our favorite Political Junkies (Ken Rudin) doesn't know what exactly to make of this pin he thought the discussion on facebook was great and opening up lots of new questions. For instance does anyone know if there is a Stevenson-Morse coattail pin from 1956?

Fellow Oregon collector John Silvertooth doesn't think this was an approved Morse pin as it did not have a union bug (which may very well be true) but, like modern vendors today I highly doubt Ress asked for permission to sell a pin to someone promoting a particular candidate. Just as easy, since it looks like Ress stamped with ink on the reverse of the pin it might have faded away over time. There is a lot of rust on the back of the pin above.

So what do you think?

Is the GOLD-RED pin a Wayne Morse for President pin from 1960 or is it for another Morse?

Morse ended up doing very poorly in the 1960 Democratic primaries and withdrew after a tough second place finish in the Oregon Primary. He even opted out of joining his fellow Oregon Democrats at the 1960 Convention. Instead, he watched it on television from his home in Eugene with his wife. Hard to imagine one of the most prominent politicians of his party from Oregon not attending this event.
Posted by Carl Fisher at 6:45 PM