With Veterans Day 2013 soon upon us, it seemed appropriate to look at some of the political items used by and to appeal to veterans during our heated political campaigns. 2012 marked an interesting moment in American politics. It was the first time that none of the major candidates were veterans themselves. John McCain was the last veteran to be nominated by a major political party back in 2008.

Appealing to voters that are veterans is nothing new; it goes back to the 18th and 19th centuries. After the Civil War, veterans groups formed all around the nation and political candidates knew they needed to reach out to this group. Compared to the general voting public, veterans are more likely to cast a ballot than non veterans. Many campaigns have attempted to reach this important voting group over the years.

Here is a scarce item from the 1880 election. The Democratic Party having suffered defeats from Republicans nominating General Grant and then going through the razor thin defeat of Samuel Tilden nominated a Civil War General of their own for President. The party nominated Winfield Scott Hancock to run against fellow veteran James Garfield. Below is a ribbon from that campaign.
If the 1876 election was close, the 1880 election was just as close, if even closer because there was no electoral college controversy.  There was only a 1,898 vote difference. Garfield prevailed with 48.3% of the vote to Hancock with 48.2%.

General Dwight D. Eisenhower is perhaps the most recognized veteran to seek political office (perhaps today more recognizable as a veteran than even George Washington). Like Washington, Eisenhower was courted by political parties of all stripes. There were draft movements in 1948, but he declined. Unlike Washington, when the time came for Ike to run, he ran under the Republican banner in 1952. 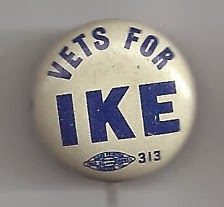 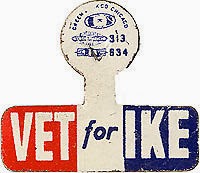 There are hundreds of items related to veterans and political candidates from over the years. You can easily start a accumulating items at very little cost. Don't forget to take a moment and thank a veteran in your life Monday.