With the approaching 50th Anniversary since JFK's passing I went through my collection and pulled out all my JFK pins. It isn't much, but when you've been in college and working part time for the better part of the time you've been collecting you don't get much of a chance to get some of the 'good stuff', as JFK items have always been desirable.

Oregon member Grant Schott wrote up a great recap of JFK's visits to Oregon in the lead up to the 1960 Oregon Presidential Primary over at BlueOregon (one of the leading political blogs of the state). 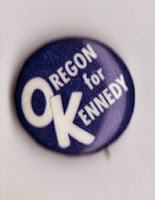 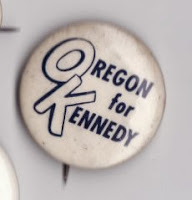 Here are some close ups of the two Oregon pins in the above photo, both are showing up in auctions and ebay more often. They still are great additions for any Oregon collector. The bumper sticker in the photo above has the stamp from the Portland for Kennedy Committee HQ on it, even though the sticker itself was mass produced for the entire national campaign by he Aldine Co. out of Los Angeles.