I was doing some reading of some old Keynoter magazines that I was able to find and found an article by Stephen K. Hauser in the Summer of 1998 issue. His article is about the several campaigns ran by the Universal Party of the 1960s and early 70s. The Universal Party was founded by various UFO enthusiasts and contactees (for those of you who have never seen the X-Files, this was a term popularized in the 50s and 60s for individuals who have supposedly have contact with extraterrestrials). 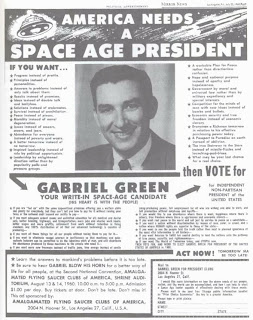 The 1960 effort was by far the least organized of the campaigns of the Universal Party. The presidential candidate for both 1960 and 1972 was Gabriel Green, who by most students of the UFO mania that swept the nation in the 1950s and 60s was one of the more lesser known contactees of his era. He formed the party in hopes to better spread the word about UFOs. The 1960 campaign was entirely a write-in campaign. Green was nominated for President at a Los Angeles convention of of the newly formed Outer Space Party, the name of the Universal Party during this first effort. Also attending this convention was a man named Dr. Addison Brown. This is the first Oregon connection to the party. In the article he is listed as being from Portland, Oregon. So far, I have yet to find out any more information than his name. If you have some information of Dr. Brown, please leave us a comment.

One button and a bumper sticker are known from the campaign in 1960. A paid political ad appeared in the Mirror News in Los Angeles. The party fields presidential candidates in 1964 and 1968 and are even more organized then their 1960 campaign. By 1972, the party had included planks about the civil treatment of extraterrestrials. 1972 also brought another Oregonian into the life of presidential politics. Merlin, Oregon resident Daniel Fry. He was the founder of Understanding Inc. 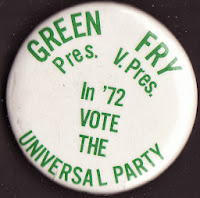 Fry claimed that he had been taken aboard an alien spacecraft and flown around New York City. While on board the ship he had a conversation with an alien named Alan. These conversations let to Fry forming much of his work with Understanding Inc., and his political views. Understanding was published between 1954 and 1979. Fry would eventually leave Oregon and move to New Mexico. An extensive website can be found with all sorts of information and photos of Fry.

There is at least one button from the 1972 campaign, which saw the Green-Fry ticket on the ballot in Iowa. The campaign headquarters was based out of Berkeley, California. They ran with a slogan of "Try Someone New in Seventy-Two-The Ones To Try Are Green & Fry". From their ballot in votes in Iowa and some write-in votes from California they ended up with 220 votes.

Addison and Fry join Joseph Lane in 1860, and Tonie Nathan, who also ran for Vice President in 1972 from Oregon as the Libertarian nominee ( and as John Silvertooth reminded me, Charles McNary in 1940) Hard to believe that in 1972, two vice presidential candidates haled from the Beaver State. The Clark-Nathan ticket was able to get one electoral vote, putting them substantially ahead of the Green-Fry ticket.