This article appeared in The Victoria Advocate shortly after the 1952 presidential election. For some perspective; that was over 60 years ago. Even as far back as then, political collectors had thousands of items in their collections. Joe Fuld is the APIC member featured in this article.

HAILEY, Idaho, Dec 4. The "I like Ike" button or the "Stevenson for president" pin you sported durin the presidential campaign isn't worth a continental now--except to Joe Fuld and his fellow members of the American Political Item Collectors Association.

Fuld, who is president of the collectors association, has the den of his home lined with cases of political insignia. He has more than 3,000 campaign buttons, banners and pins, dating as far back as the 1840 election. One of his four items from that campaign carries William H. Harrisson's famed slogan "Tippercanoe and Tyler too."


The variety of insignia which ingenious minds have devised for presidential campaigns is amazing. Fuld said. In the first 50 years campaign insignia were used, they were made of brass, silver, lead, wood, bone and rubber. Some were holed for suspension from watch fob or chain.
Many of the campaign buttons contained a "plank" from the candidate's platform or his face in relief.
It wasn't until the campaign of 1892 that the celluloid pins and buttons, so popular in recent elections, made their appearance. The low cost of celluloid pins popularized the campaign "buttonholing"of voters, Fuld said.

Cost to party organizations for the manufacture and distribution of emblems of the 1860s little rectangular brass cases with pin backs and lenses over their faces to magnify inscriptions would be too much today, he declared.

So widespread is the use of the celluloid campaign buttons that the candidates themselves don't realize how many varieties there are in circulation. In correspondence with Alfred M. Landon, Fuld told him he had 43 different buttons of the Landon-Knox campaign of 1936. Landon wrote back that he had only seen three or four. Fuld sent Landon several of his own campaign buttons. 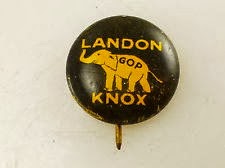 Does anyone remember Joe Fuld? Did anyone ever get the chance to look at his collection? It seems his interaction with Alf Landon was very positive. We know Landon lived until 1987, did any other APIC members have wonderful interactions with him? One of the first pre-1960 pins I ever got as a collector was one of those brown and yellow Landon-Knox pins without the felt sunflower backing. It was right there in my downtown antique shop. Now, after ten years of collecting, I have seen so many, they must have been the Nixon Now pins of their hayday.

Joe Fuld was the first President of the APIC, and his collection can be seen at the Blaine County Historical Museum in Idaho.  The collection contains over 5,000 political items dating back to the 1820s. Joe was born in 1878.