One of the great things about being a locals collector is the sheer amount of materials out there in the locals field. Everything from a Ronald Reagan for Governor pin to a Al Smith for Sheriff pin is out there for fans of the candidates who later run for president. Then there are the items for folks who run for water board, school board, city council, auditor, county commissioner and then the biggest office in most municipalities across the country is that of mayor.

Founded in 1845, Portland is the largest metropolitan area in the state of Oregon. Portland is governed by a commission style government. The Mayor of Portland sits on the commission with 4 elected City Councilors and the City Auditor. All are elected to 4 year terms. These six folks govern the 100 or so neighborhoods that make up the city of Portland. As of 2011, it is estimated that nearly 600,000 people call Portland home. While the elections are all non-partisan, the city is known for it's abundance of Democratic candidates and office holders. All of the members of the state legislature from Portland are Democrats. The last Republican to be Mayor of Portland was Connie McCready, completed Mayor Neil Goldschmidt's term after he was appointed to the Carter Administration. The last Republican to be elected Mayor of Portland was Terry Schrunk.

2012 represented another campaign for Mayor of the Rose City, and it was an interesting campaign. There were 23 candidates on the ballot in the May primary. People of every walk of life stepped up to the task of running for mayor. There were college students, writers, engineers, real estate agents, artists, a CEO, a former city commissioner, and a member of the legislature all running for the same office. There was even an Occupy Portland supporter in the mix. Tre Arrow even popped up again. Instead of perching himself on a window ledge, he perched himself on the ballot.

Out of the 23 candidates, the three top vote earners were New Seasons Co-Founder Eileen Brady, Former Commissioner Charlie Hales, and State Representative Jefferson Smith. Two other candidates also did a very respectable job at breaking through the media cloud that surrounded the top three candidates. Max Brumm and Cameron Whitten, both generated some press in their campaigns that got them noticed.Whitten came in 5th and Brumm came in 9th.

Running for Mayor of Portland has in recent years become something akin to running a statewide campaign. Eileen Brady raised over a million dollars in her quest to become mayor. Jefferson Smith and Charlie Hales during the primary raised about half that respectively. This was the first campaign for mayor since the public financing of elections had been overturned by the voters. What was once a possibility for a candidate to run with little funds now seems nearly impossible.

Here are some items picked up on the campaign trail of the May 2012 primary. 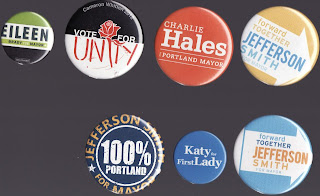 1)  Eileen Brady pin. She had 3-4 other different pins of various sizes along with all sorts of neat stuff like fleece vests.
2) Cameron Whitten for Mayor pin. I don't expect you'll many of these, Whitten finished in 5th place with just over 1% of the vote in the May 2012 primary. He would later be nominated by the Oregon Progressive Party to run for State Treasurer.
3) Charlie Hales, the eventual winner had several different pins made by his campaign and some the groups supporting him. This was his generic pin.
4) Orange Jefferson Smith Pin is one of the two standard colors used by the Smith campaign. They are very reminiscent of his pins used in his race for state representative.

1) Jefferson Smith 100% I believe was a submitted entry in a contest for a design a sign or button contest.
2) Katy for First Lady is a small pin that was given out at several Democratic functions in the state by a support of Jefferson Smith. Katy is in reference to his wife.
3) A different colored version of the Orange pin above it.

The field of  23 candidates was winnowed down to 2 for the November General Election, where Charlie Hales was able to pull of a victory 30 point victory over Jefferson Smith due to campaign stumbles during the final month of the campaign. For most of the summer the campaigns had been pretty even, with a large block of voters uncommitted or undecided over who to vote for.

Charlie Hales was under attack for dodging Oregon income taxes and Jefferson Smith was falling under intense scrutiny over a conflict that had occurred at a college party twenty years ago while he was studying at the University of Oregon, and his revisiting of the female party goer he had the conflict with during the latter weeks of the campaign. These missteps and the problems with Charlie Hales led some former Brady supporters to mount a write in campaign, "Cast a vote for the candidate who never embarrassed herself or her supporters. Cast a vote for the candidate who has given over 25 years to making Portland a better city. Cast a vote for the candidate who, alone of the top three on May’s ballot, actually lived the life of the 98% / 47%. Write in Eileen Brady for mayor", the full article explaining the write in campaign can be found here. 20,000 write in votes were received. This came out to 7.50%. The last time there had been a November election for mayor in 2004, the write ins only totaled almost 1%.


Portland Stays Weird and collectors stay happy as all the campaigns generated a lot of neat items. There is a lot of great stuff out there from the campaigns so keep looking!

If anyone knows who the last Republican elected a Portland City Commissioner was, please drop us a comment here. We'd love know.