Many of the campaigns have turned to a Texas company called 'BumperActive'. It is very uncommon for so many campaigns to use the same vendor as their official source of campaign materials. Some campaigns are not using this company (notably Joe Biden,  Andrew Yang, Marianne Williamson). Some campaigns even switched over from their previous vendor to BumperActive (Cory Booker). All this is to say, that there are a lot of items out there if you are interested in getting some from a campaign this cycle.

Booker started out with three large 3" inch designs on his website. For $10 dollars + shipping, you got three pins. Here are the pins from his original website. 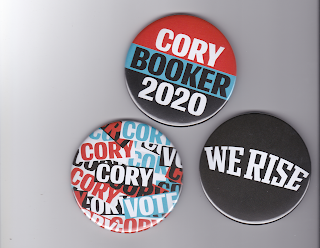 For some reason unknown to those of us outside the campaign, at some point in late spring (shortly before June Pride month) the campaign switched vendors and produced the same pins in the more standard size of 2.25". Through the new vendor, you could buy each pin in sets of 2 for $5 for each set.

They also introduced their Pride pins consisting of two new designs, selling 2 for $4 each. 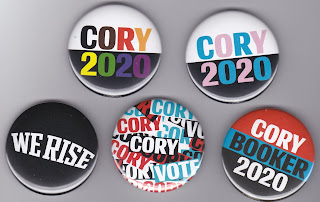 All in all, not a bad set of pins for just over $20 dollars. You get two pins of each, so you can trade one away or give one to a friend supporting Booker. There was a square Cory pin produced for a fundraiser back in New Jersey. Collector Rich Gannon brought this one to our attention. 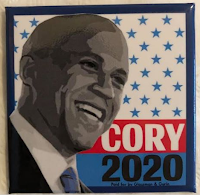 It is unknown if any other collectors were able to get access to this pin, as it was made for a fundraising event at a private home. Sure to be one the toughest Booker pins to get out of New Jersey for the 2020 collector or fan of Cory Booker.

When Joe Biden entered the 2020 campaign, he brought a lot of buttons with him. He's been running for office since the 1970s and you can find Biden items from just about every campaign he's ever run. His earliest presidential campaign buttons date back to the mid-1980s, to help him gear up for his first of three presidential campaigns in 1988. One day, some brave collector will write a lengthy article about all of the Joe Biden items out there to find. Here are the items offered so far from his campaign. 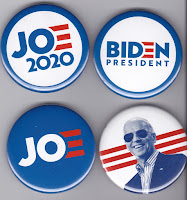 The first wave of pins were all 2.25" issues. Mostly plays on his new logo. A lot of people have commented on how they like the photo pin of him in sunglasses. 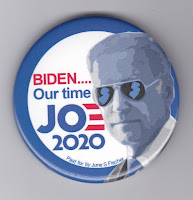 This pin was issued by June Fischer, a long-time former DNC member, and Biden supporter. It looks like it was made by the same company that made the Booker New Jersey pin above. If you look closely you will see that New Jersey is reflected back in his glasses. 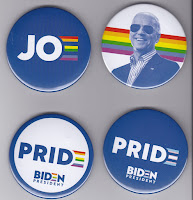 Biden's team also issued Pride buttons shortly before Jun 2019. These pins are different from the first wave of Biden pins. They are all 3" pins. Using the lines as an E will no doubt be a campaign staple over the coming months of the nomination race.

I would expect more Biden buttons to come as we head into the Fall of 2019. There are already a number of grassroots and vendor buttons popping up online. In a future post, we hope to highlight some of the past Biden presidential buttons.

Have you seen any Booker or Biden buttons we haven't mentioned here? Please feel free to share them.