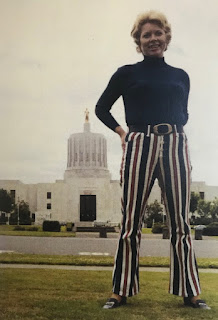 Norma Paulus was the first woman to ever be elected to statewide office in Oregon history. 1976 was the first presidential election after Watergate and voters made their feelings known throughout the country about the shenanigans of the Republican Party and President Nixon. President Ford would seek the GOP nomination and have to fend off a strong challenge from California Governor Ronald Reagan.

There are a number of Paulus related items out there. I have seen paper items for a couple of her state legislative campaigns, but do not own any. Here is a photo of most of my items. 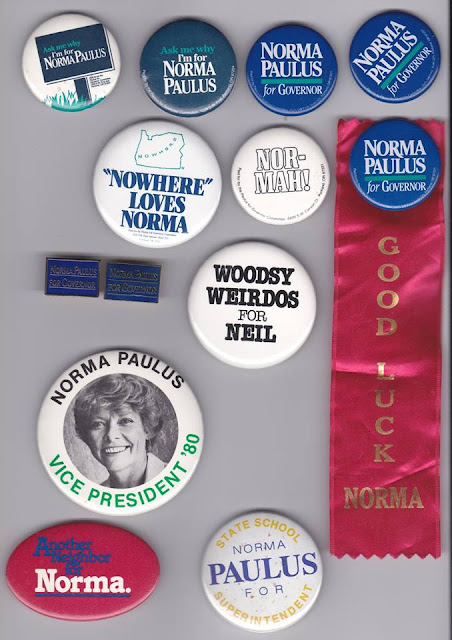 The read oval button is from one of her Secretary of State campaigns. The large photo pin is from 1980 and was made by a women's political PAC that was interested in nominating women for Vice President at the GOP National Convention in Detroit.

8 of the buttons are from her 1986 campaign for Governor of Oregon. She won a 7 way primary to become the Republican nominee. Betty Freauf was the social conservative challenger, her campaign would give way to many of the more conservative nominees that would vie for the leadership and electoral clout of the Oregon Republican Party in the 1990s and early 2000s.  She was active in the Oregon Republican Party and even ran for the legislature in 1988.

Woodsy Weirdos for Neil was a button making fun of the hippy environmentalists that folks outside of Portland stereotyped as Goldschmidt supporters. Remember, 1986 was just the start of the economic and environmental battles between industry and conservationists about timber, fish, and spotted owls.

Nowhere Loves Norma was one that she always got a kick out of as a button. It was based on a comment Neil Goldschmidt had made that no one lived in the Bend area, where they were negotiating for a debate.

I'm not sure where the button and ribbon combo came from. Could either be her campaign kick off or even election night party.

Brent Walth wrote a wonderful retrospective of the 1986 campaign for Portland Monthly. You can read more details and insights about that race than I will offer here.

One of the neatest campaign items I have found is a Norma Paulus sand dollar. I got mine from a longtime Oregon collector and on the reverse side was a note saying these were given out by the Benton County Republicans. 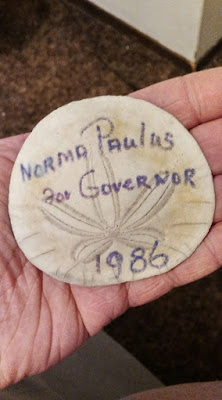 The last button in the image is from either her 1990 campaign for Public Instruction. She replaced Verne Duncan shortly before the election and was able to run as the incumbent. She won re-election in 1994. I don't have any items from that race or her last race for U.S. Senate. After the resignation of Bob Packwood, she was one of several Republicans to run in the 1995 Special Election Primary for the seat. She lost to Gordon Smith, who would go on to lose the election to Congressman Ron Wyden.


She collaborated with two writers to finish an autobiographical work The Only Woman In The Room, published by OSU Press. Here is her obit from the Oregonian.


I'm still looking for items from her legislative career and U.S. Senate Campaign. Do you have any Norma Paulus items to share?