If you asked some people, I'm sure they would tell you professional wrestling and politics have a lot in common. There is the theatrics of trying to tell a story to win over a crowd. The competition of facing off your opponents. The tables, ladders and chairs. Ok...maybe not exactly that tough, but you get the idea. Sadly, there is also that part to politics and professional wrestling that you just know is predetermined. We know before going in who is going to win in most cases. Sometimes the writers pull a surprise and have Barack Obama beat Hillary Clinton in Iowa...but most of the time we know who is going to win. Folks like Nate Silver have made election night surprises very rare.

After Jesse The Body Ventura's remarkable win for the governorship of Minnesota in 1998 other professional wrestlers started contemplating running for public office. There have been draft movements to get folks like Hulk Hogan to run for President.

During the 2000 Democratic and Republican National Conventions stars like Mick Foley and The Rock addressed the conventions to get young voters to tune into politics. Wrestling was king during this time in American pop culture. Politicos who never heard of Mankind, Stone Cold Steve Austin, The Rock, were taking notes from these folks on engaging young voters. These efforts were called 'Smackdown Your Vote!' and were repeated during the next several elections.


The UPN show Smackdown was one of the highest rated programs on television in 2000 and WWE (then WWF) sent out a challenge to Vice President Al Gore and Governor George W. Bush to appear and have a 'youth debate'. The 'jabronis' as The Rock would call them, never showed up.

All this political build up in professional wrestling may have gotten the Nature Boy Ric Flair interested in running for public office in his native North Carolina. He had appeared on Regis and Kathy Lee and made an 'unofficial' announcement.

Carlton Hurt joked in The Dispatch that he sees a future 'loser leaves office match' between Governor Ventura and 'future' governor Flair.  He gave some thought to actually running, but the demands of a full time wrestling scheduled kept him from the ballot.

2000 was not the year for Flair. A longtime Republican Party supporter, he would continue to support local Republicans and presidential candidates. In 2008, he supported Governor Mike Huckabee in his presidential campaign.

One button managed to get produced. My bet is it is a vendor item, but still an neat button to have for any celebrity or pro-wrestler collection. 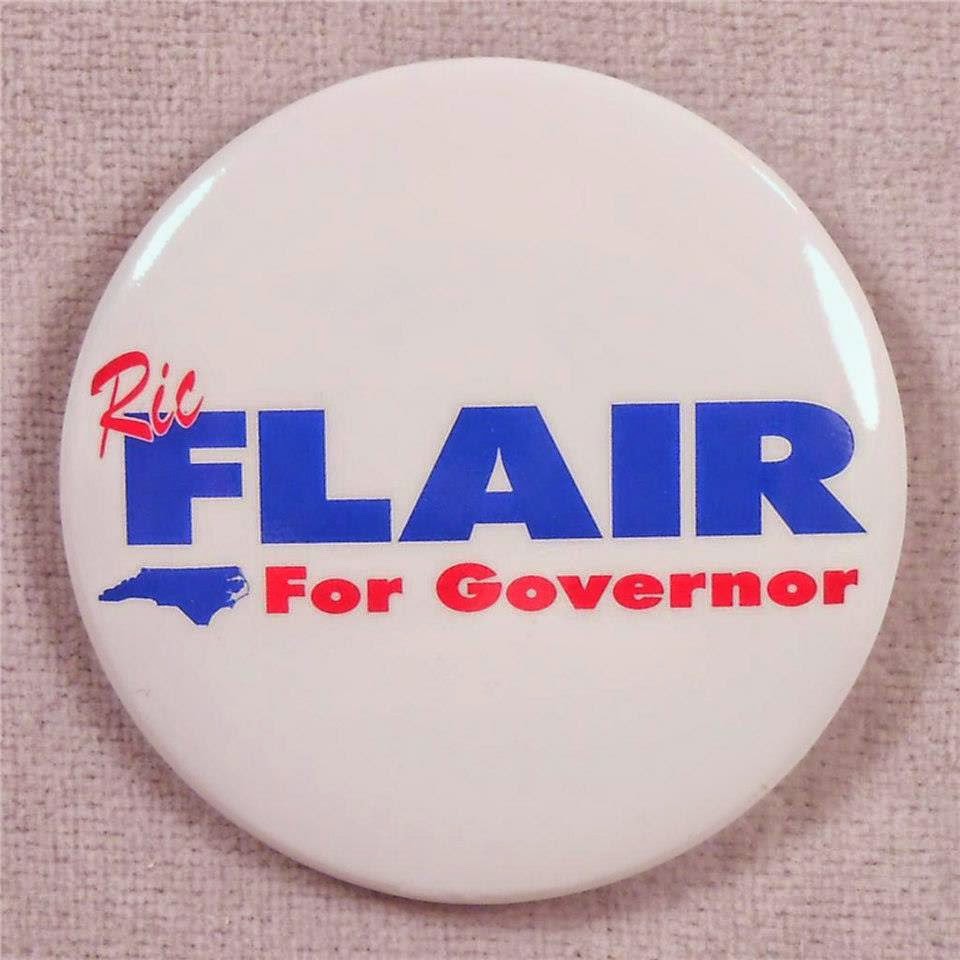 Other wrestlers have run or conteplated running for public office. We'll explore more in the future.