Richard Nixon. Everyone knows the good, the bad and the ugly about him and his administration and how that is related to Watergate. Most Oregonians though are unaware that for a few days leading up to the 1968 Republican National Convention Nixon and top aides actually placed Oregon Senator Mark Hatifeld on a short list of eight people to be considered for the nomination of Vice President on the Republican ticket.

In the weeks and sometimes months before a political convention you can find some of the best 'fantasy ticket' items produced. A fantasy ticket or hypothetical ticket item is a political item bearing a ticket of a possible or favored party ticket prior to the selection of nominees from that party. Some fantasy tickets are highly plausible others are mostly just dream tickets. In 2004 a dream ticket of many was a Kerry-McCain ticket. McCain and Kerry were fellow Vietnam veterans and U.S. Senators that had been friends for many years. McCain teased the media for a few days saying he would seriously think about it if an offer was made from the Democratic Party. Of course, no offer ever did come from the party.

Still, in 1968 the Nixon campaign was candidate shopping and was getting some feedback from Oregon Republicans about the popular former Governor and now U.S. Senator Mark Hatfield. Making any potential V.P. list is no small feat. The build up of getting Mark Hatfield involved in the Nixon campaign had started much earlier than just a few days before the 1968 convention in Miami.

In some ways 1968 was very similar in tone to 2012 race for the GOP nomination. A frontrunner had emerged and every week it seemed like a new challenger would step forward to try and take on Richard Nixon. The May 1968 Oregon primary saw Nixon forces help break Senator Hatfield away from Nelson Rockefeller and come out to support Nixon. This was more than likely the moment the Nixon campaign placed Hatfield on the short list for V.P. 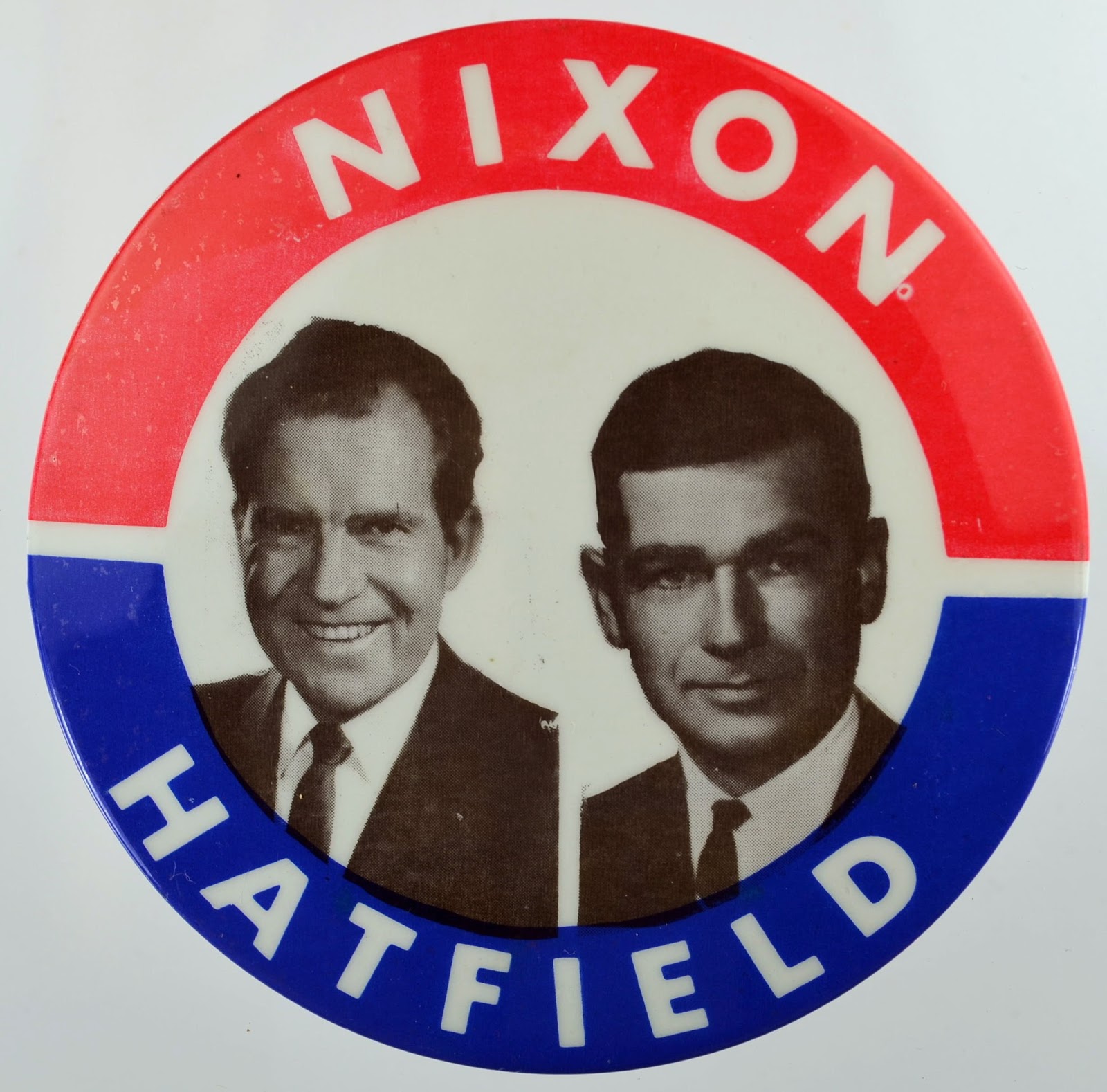 Hatifeld was a dove, a very vocal opponent of the war in Vietnam. He represented a segment of the voting population that the Nixon campaign wanted to tap into. If they could generate some pro-Nixon media attention by floating Hatfield as a possible V.P. choice then quietly find reasons not to ultimately select him and still keep him in their camp they will have secured a lot of votes away from Humphrey.

Like the lithos above, this 3 inch celluloid Nixon-Hatfield pin was created as part of a set of possible GOP tickets in 1968.

Senator Hatfield, after the Oregon election met with Richard Nixon and thought that he could get the United States out of Vietnam in a timely manner. The Toledo Blade reported Hatfield as saying, "I am not attempting to portray him as a dove...he is not locked in as Mr. Humphrey is' in support of present policy'".

Oregon Republicans spent most of the summer excited about the possibility of Nixon selecting Hatfield as his V.P.  The more he talked about the national campaign, the more speculation was fueled about a possible slot on the ticket.

Robert A. Smith, a longtime Oregon journalist wrote about the ramifications of the Nixon-Hatfield lunch that helped switch Hatfield from supporting Nelson Rockefeller to Nixon. Smith points out that the pairing of Nixon and Hatfield just doesn't benefit Nixon, but it would also be to Hatfields benefit to have a voice into the White House. The insider role is more along the lines of his personality as well.

As strong of a policy and electoral alliance Nixon and Hatfield had built, it was still no match for the grinds of national politics. Nixon's famous 'Southern Strategy' was built on a foundation of bringing over disgruntled  southern whites to vote Republican. Nixon needed to appeal to a more conservative base than any GOP candidate before him in the last fifty years. When meeting with top campaign aides and friends, Oregon's Mark Hatfield was eliminated by Senator Strom Thurmond of South Carolina and John Hightower of Texas who believed him to be too Doveish and moderate for the south and other conservatives. The least objectionable choice for VP went to Maryland Governor Spiro Agnew.

While Hatfield did not get the VP nomination out of the 1968 convention, he did pick up a prime speaking slot getting to nominate Richard Nixon for President. He also found a political advocate in the Rev. Billy Graham. 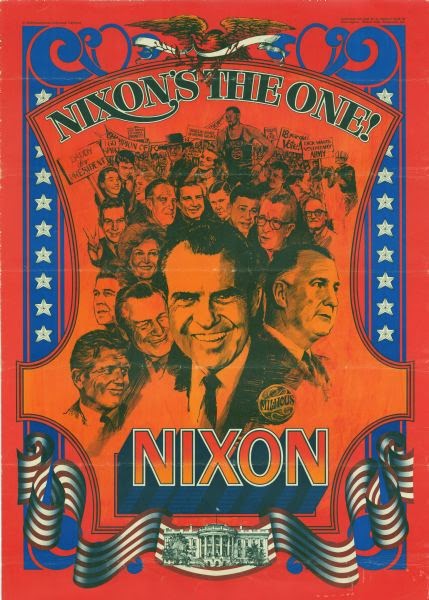 Here's one of the best Nixon-Hatfield related items. A Nixon campaign poster featuring all sorts of individuals who have come out to support Richard Nixon in 1968. Senator Hatfield is featured in the upper left above Ronald Reagan giving the 'Peace' hand gesture.

Had Nixon selected Mark Hatfield as his running mate and the pair narrowly beat out Humphrey and Muskie in November it would have meant big changes for Oregon. The home of the newly elected Vice President would need to select a new U.S. Senator. At the time that job fell to the Governor. Who was the gov at the time? None other than maverick Tom McCall.

Robert Smith again brings to light just what having Hatfields name circulated as a possible VP pick meant to Oregon Republicans like McCall.  "There was more than party unity or fraternal feelings in McCall's pro-Hatfield activity at the convention...McCall, in a word, would have been in the happy position to of selecting Hatfield's successor - and McCall confided at one point during the convention he was already anticipating such a circumstance and would likely appoint himself to the Senate."

Hatfield goes to the White House, McCall to the Senate...that would open up the governorship to whomever controls the State Senate at the time. Perhaps McCall possibly heading to the Senate was calculated in Nixon not selecting Hatfield for the VP job. Hard to say without an insiders perspective.

The items you have seen pictured have all been well documented in various online auctions and ebay. The red Nixon-Hatfield lithos can be picked up, depending on condition for $5-$10 dollars. The Nixon-Hatfield jugate pins can be picked up still for $10-$20 dollars. The Nixon and Hatfield poster I have only ever seen one of and were supposedly used at the 1968 convention. The Nixon poster with Hatfield is very common and you should expect to pay $5-$15 dollars for an unframed one.

Mark Hatfield was also a member of the American Political Item Collectors (APIC). He, like us, was a political junkie and had an amazing collection. He was particularly fond of Abraham Lincoln. Parts of his Lincoln collection are available for  loan to various museums across the state of Oregon.  Senator Hatfield passed away in 2011.