The late 30s were certainly an interesting time in Oregon. The normally Republican state had swept Democrats into office at various levels during the Great Depression. Franklin D. Roosevelt had carried the state in the last two presidential elections. It was unprecedented in Oregon history. The Democratic party had only carried Oregon twice since statehood in a presidential contest. It had now voted for a Democrat twice in the same decade! The governor, Charles Martin, was a Democrat. Elected in 1934 with the New Deal wave sweeping the nation, he was not a natural ally of Roosevelt. Many Republican business interests were backing him, especially in his dealings with labor and the Bonneville Power Administration.

He called in the national guard on several occasions to deal with striking timber workers. He was opposed to wage restoration of state employees, who in the early years of the depression and the war had seen their pay cut 50%. He opposed the National Labor Relations Board, and thought the Secretary of Labor Frances Perkins (the first woman to be appointed to a cabinet post in U.S. History) was the 'head red' in the Roosevelt Administration. Needless to say the Oregon Democratic Party did not like the idea of renominating Governor Martin for the job in 1938. President Roosevelt was also not about to help Martin in any way, as the '38 elections got closer he sent an adviser out to support one of the opposing Democrats running against Martin. Harold Ickes, Roosevelt's Secretary of the Interior was dispatched and supported State Senator Henry Hess. There was another candidate in the 1938 Democratic primary. His name was Dr. Jacob Fredrick Hosch of Bend, Oregon.

Hosch, was a strong proponent of the New Deal and his driving issue towards running for Governor was Bonneville Dam. There was no greater issue in his view than the strengthening of public power in 1938. At the time of the election he was serving in the state legislature as a state representative from Deschutes County. As early as 1937 he had been considering a run for governor against Martin. In February of 1938, he declared his candidacy. The Bend Bulletin covered the story. His statement accompanying filing read,

deeds, not words, will bring the new deal to Oregon. President Roosevelt's human politics must be respected and upheld in our own state. Farmers must receive decent c consideration and labor fair treatment. Relief, pensions and public works must be humonely administered. Nobody should go hungry or homeless. Bonneville, through public ownership, must lower electric rates for everyone, not for a few favored industries. I am equally opposed to unlawful violence by individuals, by employers, or by state officials. My record indicates my stand against sales taxes, gambling and extension of liquor stores (The Bulletin, 2/23/1938)

A pin being offered in the All AmericanLocal's auction #62 is from his short lived campaign. His campaign was short due to the fact that he could not raise the needed funds he thought he needed to mount a serious campaign against a sitting governor of his own party. Also the three groups he thought would be helping him finance his campaign were each divided and not united behind him. Those groups of course being Labor, the Grangers (Farmers), and Public Power advocates. 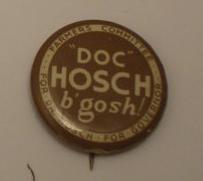 Item number 446., on page 18 of the auction is a brown 7/8 inch cello from his Farmers Committee. I'm not sure if it is worth $100 or more. I have only seen about five of them myself. They are rare, and when you are a locals collector you'll pay a little higher price for a rarer item. If I stumbled upon this item for $40 dollars or more at an antique shop in Oregon, I'd probably have to pass or try and negotiate to around $20. Still, if you are a locals person and live outside of Oregon this may be your only chance so good luck bidding.

Hosch ended his campaign on April 4, 1938. He cited lack of funds and lack of unity among his core support groups. Like many modern day campaigns, he was hoping their memberships would open their wallets to his campaign. He said financing his own campaign was “more than a poor man could do” (imagine the days when a practicing physician considered himself a poor man!) so he dropped out of the race and went back to focusing his attention on his patients in Bend. It also appears that he declined to run again for another term in the legislature. Dr. Hosch ultimately endorsed Henry Hess of LaGrande in the race to unseat Martin. He didn't care who the nominee was, so long as the nominee was not Martin.

The Hosch button that I own is more generic and has a matching Hess pin. It is a 7/8 inch blue cello with a Portland union bug on face. If you see it for $5-$10 dollars pick it up. I am not sure what the actual value is, some of the more senior members of the Oregon Political Item Collectors may have a better idea. For not even getting on the ballot we have spent a great deal of time talking about a candidate who ended up quitting before the filing deadline. That's politics for you.

If you see anymore Hosch related items be sure to send us an image!
Posted by Carl Fisher at 4:30 PM