This article was first published in The Daily Sentinel in 1976. It is summerizing a meeting of the Ohio Chapter of the APIC. It mentions members Dan McFarland and Ed Veleber. McFarland was the President of the Ohio chapter and Veleber was an member from New Jersey. 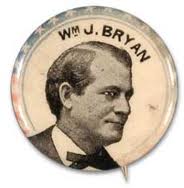 COLUMBUS (UPI) In 1900 supporters of William Jennings Bryan for president were giving away buttons with Bryan's picture on it. Monday the button could cost you $125 dollars. That's what a 1900 Bryan campaign button was selling for at the fall meeting of the Ohio American Political Items Collectors Saturday. 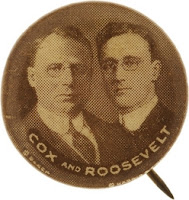 The Bryan button was just one of thousands on display by dozens of collectors who admittndly, put high prices on "some favorites"they don't want to sell. Most of the buttons pictured presidential candidates, but some displayed Ohio state candidates, and some even county office-seekers. The worth of a particular button depends not only on how old it is, but on its rarity. Dan McFarland, president of the Ohio Chapter, said a 1920 lapel pin showing James Cox and his runningmate, Franklin D. Roosevelt, can bring close to $2,000.

McFarland pointed out that it was the only national election Roosevelt lost and there are only about 25 such pins in existence. Ed Veleber, Dunmount, N.J. values his collection so much -- which includes an "I Like Ike" pair of sunglasses with 'peace and prosperity" painted on the frame --he had a jigsaw puzzle made out of a photograph of the collection and is selling them through a game company.

Valeber said the value of a button depends a great deal on the popularity of a candidate. Big sellers, he said, are Harry Truman and Theodore Roosevelt items. He noted that it's too early to set a price on two items he displayed --Carter-Mondale and Ford-Dole buttons.

$2,000 dollars was a lot of money for a pin in 1976. Now, unless you are lucky to come across one in a shop or find one in some old dusty attic, you should expect to pay at least $10,000 for even a beat up version of any Cox-Roosevelt jugate. Whereas now, you can buy man Bryan pins for under $50 dollars.

Does anyone have a copy of Veleber's puzzle they could show off for us?
Posted by Carl Fisher at 2:52 PM